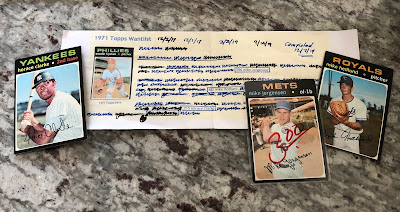 On Saturday, and for the third and final time this year, Doug and I attended the Valley Forge baseball card show.  Doug was given a "loan" based on his anticipated upcoming birthday money haul and he spent the show picking up new Bryce Harper, Scott Kingery and other Phillies cards along with adding to his Mike Trout personal collection.

We added autographs from Benito Santiago, Brad Lidge and Ryan Howard, and I'll have photos of those friendly encounters up in a separate post.  Doug was happy to get the other half of his Pride of the Phillies print signed by Howard, as it had been previously signed by Carlos Ruiz. 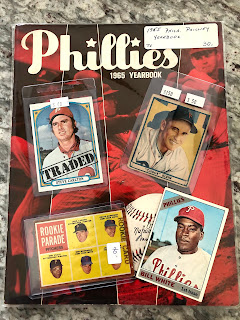 Here's a summary of what I tracked down during another very productive, very crowded show:

It was another great day, although I'm happy (and my wallet is happy) that we now have a few months off until our next show.

Thanks! I'll admit I've cheated somewhat with the Topps sets since around 2005, opting to buy a factory or hand-collated set towards the end of the year. I expect (and hope) Santa brings me a 2019 Topps factory set in a few weeks.