Doug and I managed to go a full year without attending a baseball card show, so we were excited to make the hour drive to The Greater Philadelphia Expo Center in Oaks, PA on Saturday.  Doug decided to try something different this time, foregoing any lists and opting instead for a day of free-style picking as he liked to call it.  He tends to favor Phillies certified autograph and memorabilia baseball cards and a picture of the latest additions to his collection is found below.

My goal was to add autographs of Matt Stairs and Cole Hamels (two of the guest autograph signers), get closer to completing my 1971 Topps set and add to my vintage Phillies baseball card collection.  All goals were accomplished. 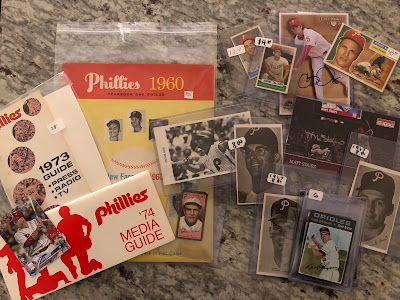 Nice haul for both of you!

Love that 56 Ashburn! Great haul... and in person autograph experience for you and your son.

Looks like a another good day at the Philly Show with some nice experiences for you and your son! Hamels has a curtain next to him--was he blocked from view for non-paying fans? That seems like a different set-up than the usual one.

Hamels was in a corner and stationed with 3 "handlers." The 1st handler was telling everyone that Hamels wouldn't be posing for pictures. When Doug was having his card signed, I asked Doug to look up and smile and Hamels did the same!