I'll be thinking of my Dad today, on what would have been his 76th birthday.  Not a day goes by where I don't think of him.

As pure luck would have it, one of Dad's favorite players, Dick Sisler, is the featured card over at my relatively new blog celebrating the 1965 Topps set.  My oldest son Doug and I are building that set card by card in the same manner my Dad and I built our 1956 Topps set.  Please check it out and while you're there you can browse through the other cards we've added so far.  Dad would be proud.
Posted by Jim at 7:00 AM 1 comment:

Email ThisBlogThis!Share to TwitterShare to FacebookShare to Pinterest
Labels: 1951, Sisler

No sooner had I posted on Tuesday an update to the Phillies non-roster invitee list with the Post Title, "Non-Roster Invitee List - 21 and Done?" did news start coming out on Twitter on the signing of several more veteran players.  The Phillies added four fairly well-known players to the invitee list, bringing the total to 25 and the total tally of players coming to camp to 65.  I've been tracking this kind of thing since 2012 and this is the highest number of players since the 67 who were in camp in 2016.

Veteran right-handed pitchers Bud Norris and Drew Storen, along with lefty Francisco Liriano and infielder Neil Walker will all get serious looks down in Clearwater.  Norris is a 10-year veteran who most recently pitched for the Cardinals in 2018.  He enjoyed his best years with the Orioles in the mid-2000s and was a 15-game winner in 2014.  Storen is the former Nationals closer who lost his job to Jonathan Papelbon in 2015.  He has 99 career saves and last pitched for the Reds in 2017.

Liriano is a 14-year veteran and had a decent year for the Pirates last season, appearing in 69 games and pitching to a 3.47 ERA.  And finally Walker also had his best seasons with the Pirates in the early 2000s.  He was with the Marlins last year and hit .261 in 115 games.

Walker, Liriano, Andrew McCutchen and Josh Harrison were all teammates on the 2015 Pirates team that won the N.L. Wild Card and all four will be in camp with the Phillies in 2020.  Other former Phillies on the 2015 Pirates team include Sean Rodriguez, Pedro Florimon, A.J. Burnett, Charlie Morton, J.A. Happ, Jared Hughes, Antonio Bastardo, Vance Worley and Joe Blanton.

In early January, various Twitter reports announced the signings of catcher Christian Bethancourt and infielder Ronald Torreyes to minor league contracts with invitations to spring training.  As the Phillies website just recently added these two players to their official Transactions listing and the Non-Roster section of the team's roster, I wanted to give them their due here as well.

Bethancourt is a veteran of five big league seasons, having last appeared in 2017 with the Padres.  He'll be the fourth potential backup catcher in camp along with Andrew Knapp, Deivy Grullon and Henri Lartigue.  Torreyes has also played in parts of five seasons in the Majors, and he appeared in seven games last year with the Twins.  He appeared in 108 games for the Yankees in 2017, hitting .292.

With the start of spring training now 3 weeks away, and barring a trade, the Phillies' roster seems set with 61 players scheduled to suit up in Clearwater.

As a lifelong Phillies baseball card collector, one of my favorite sets has always been the team-issued photo card sets.  These are oversized cards produced by the Phillies and sold at the ballpark annually for a reasonable price - $5 a set in recent years.  The sets feature players, coaches, the manager, occasionally the announcers and usually a card for the Phanatic.  The photography is consistently excellent and my favorite part of the set is it's usually where a number of short-time Phillies players receive their one and only Phillies baseball card appearance.

I began a project a few years' back to catalog and checklist these sets, and I've created a page to serve as a table of contents for all of the team-issued sets dating back to the 1950s.  When I started the project, I was confident I had every Phillies photo card issued since at least 1983 as I had diligently tracked down a set or two each year at the Vet or later, Citizens Bank Park.

I was wrong.  I had nowhere near every card.

Fellow collectors Rick and Steve, along with a few other helpful fans, educated me on the team's practice of issuing cards for their annual ALS Phestival, or producing cards solely for players to honor autograph requests, be it through the mail or at scheduled appearances.  There were late season update sets I didn't know existed and variations of cards featuring different photos.  The Phillies' marketing department has been haphazard in its approach to producing these cards over the years, so knowing what I know now, I'm on high alert for variations or the possibility of a new card appearing in seemingly random situations.  I have many White Whales listed in my want lists, particularly in my want list of Phillies photo cards issued since 2000.

I can go months or years without seeing any of these cards available for sale at shows or in eBay auctions, and then as was the case last week, I found two a few days apart.  In 1996, the Phillies issued a 36-card team set that included a card of new outfielder Lee Tinsley, but featuring a picture of another new outfielder, Glenn Murray.  The card was pulled from the set, and I when I bought my set mid-summer at the Vet, it wasn't included and I only had 35 cards.  I've searched for this card for years and then a few weeks ago, two separate auctions from different buyers popped up on eBay for the 36-card team-issued photo card set from 1996.  I finally have my Tinsley/Murray card.

In 1989, a 9-card update set was released featuring the many players the Phillies had added over the summer.  I've never seen the set sold together, and I've added individual cards from the set over the years with the John Kruk card eluding me.  I finally found it via an eBay auction shortly after the two 1996 sets were listed.  That's two cards down in a decades' long hunt, and I've listed below a few other White Whales.  If you have any of these, I'd be happy to give them a good home.

On Tuesday afternoon, the Phillies began the official process of moving on from the Odubel Herrera era by designating the outfielder for assignment.  He has two years remaining on his contract and he's owed $19.5 million by the Phillies, but there was little to no chance Herrera would return to the Phillies after serving an 85-game suspension for his arrest on domestic violence charges.  At one time one of the most popular players and a fan favorite, Herrera's off field problems ultimately led to his departure but he had been struggling on the field as well.  An All-Star in 2016, Herrera hit just .222 in 2019 and had been maddeningly inconsistent at the plate for the past few seasons.  The Phillies now have a week to trade, release or reassign him to minor league camp, so there's a possibility he's in Clearwater with the club in the spring.  But if that's the case he'd clearly be on the outside looking in.

Herrera's DFA was necessitated by the claiming of outfielder Nick Martini off waivers from the Reds.  The Reds had previously claimed him off waivers from the Padres in November, and the Padres had done the same in August from the Athletics.  In 32 games with the A's and Padres last season, Martini hit .226.  Martini's first baseball cards can be found in the 2011 Bowman Draft set and last season he appeared in a bunch of sets including Topps, Topps Heritage and Topps Big League.

Catching Up on Offseason Moves . . . More to Come?

While most of the former 2019 Phillies listed below are still looking for jobs, a few former players have already found new homes, including half the 2019 infield.  Both Maikel Franco (Royals) and Cesar Hernandez (Indians) will be spending their time in the A.L. Central in 2020.

Here's a refreshed look at the comings and goings so far this offseason, with under a month to go until pitchers and catchers report to spring training.  Also, the cards presented above are the "New Team" variations from the 2020 Chachi Departures insert set.


Right on schedule, the Phillies released a list of 15 prospects invited to camp as non-roster invitees.  These 15 join the list of the prior four (officially) announced invitees.  For this next batch, instead of listing out their last major baseball card appearance, I've listed their most recent card added to my collection as most of these guys are still waiting for their first major baseball card appearance.

For me, the two most interesting names on this list are Alec Bohm and Spencer Howard, as both have a realistic chance of contributing to the 2020 Phillies.  Bohm could be the team's regular third baseman at some point this upcoming season while Howard could find himself in the starting pitching rotation. 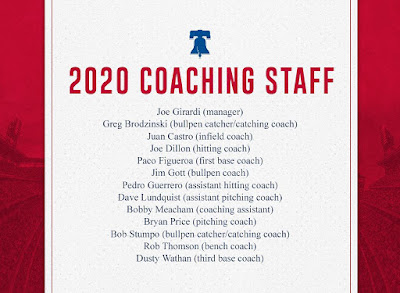 I've added this list of a dozen coaches to the linked list on the sidebar, and now the big decision is do I create 2020 Chachi cards for all 12 coaches, or do I draw the line with the "Traditional 6?"
Posted by Jim at 4:30 PM No comments: