Before the inevitable announcement of the signing of both Bryce Harper and Manny Machado by the Phillies (ahem), I wanted to catch up on a few recent departures.

A quartet of short-time Phillies officially moved on as well with Justin Bour signing with the Angels, Wilson Ramos and Luis Avilan going to the rival Mets and Asdrubal Cabrera headed to the Rangers.  All four appear in the late season team-issued photo card update set, and Ramos and Cabrera also appear as Phillies in the Topps update set.

I've updated the Moving On list below for these moves and I'll present here the full Chachi checklists for these departed players as a final tribute.

For the second year in a row, a former player with major Phillies connections was voted into baseball's Hall of Fame.  Roy Halladay, who pitched for the Phillies for four seasons between 2010 and 2013, joined Edgar Martinez, Mike Mussina and Mariano Rivera as the latest inductees on January 21st.  We lost Halladay back in November 2017, and his wife announced last week that his hat on his plaque will be logoless.  Her preference is that Halladay be remembered as a Major League baseball player, instead of specifically as a former Blue Jay or a former Phillie.

Harold Baines and Lee Smith were voted in by the Today's Game Era Committee back in December.  I've never liked the somewhat contentious debate that surrounds each years' class of inductees, and I'm not about to revisit the merits of the players enshrined (or yet to be enshrined) here.  But it sure seems to me that if Baines can get in, it's about time for Dick Allen to take his place in Cooperstown as well.  But I digress.

With each year's announcement, I like to check my Phillies baseball card collection to see if any of these new Hall of Famers show up.  Halladay of course is well represented, and as of this writing I have 192 cards of his in my collection.

And then that's it.  Unlike in prior years, in which inductees make cameo appearance on Phillies cards or share a multi-player card with a Phillies player, I don't have any cards in my collection featuring Baines, Martinez, Mussina, Rivera or Smith.

Email ThisBlogThis!Share to TwitterShare to FacebookShare to Pinterest
Labels: 2018, Halladay

Outfielder Lane Adams became the 19th player on the team's list of non-roster invitees on Monday, and he'll join the Phillies next month in Clearwater.  Adams came up with the Royals in 2014, appearing in six games and more recently appeared in 111 games for the Braves in 2017 and 2018.  He's a career .263 hitter.

It looks as if his most recent mainstream baseball card can be found in the Braves' 2018 Topps Now Road to Opening Day team set, of which just 277 were produced.  His very first baseball card came way back in 2012 in the Bowman Chrome Prospects insert set.

As of this writing, and hopefully that changes soon with some big news, the Phillies active roster sits at 39 players while their list of non-roster invitees is now 18.  Three more veterans and eight prospects were added to the list on Friday night.

I've added them below with their 2018 organization and last major baseball card appearance listed.

*This is subjective, and for the Phillies prospects largely based on the cards actually in my collection.
Posted by Jim at 7:00 AM 2 comments: 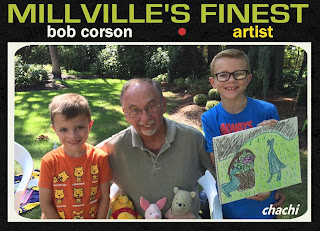 I laughed a lot when I was around Bob.  We all did.  Paula, his kids, his grandkids and his extended family know how special he was and those memories and those smiles won't fade.  We'll all continue to tell stories about Bob, just like we do with my Dad, and when we tell those stories we'll smile and laugh and remember our friend.
Posted by Jim at 7:00 AM 5 comments:

On Thursday, the Phillies seemingly put the finishing touches on their 2019 bullpen by signing reliever David Robertson to a two-year deal with an option for a third year.  Robertson will serve as a late-inning reliever, most likely splitting closer duties with Seranthony Dominguez.  Robertson has had two different stints with the Yankees during his 11-year career, first from 2008 to 2014 and then again in 2017 and last season.  In between, he spent 2 1/2 seasons with the White Sox.

One of the more reliable relievers in the game, Robertson appeared in 69 games for the Yankees last season, earning a 3.23 ERA with five saves.  An All-Star in 2011, he was the primary closer for the Yankees and White Sox between 2014 and 2016.

Robertson showed up in the 2008 Bowman Draft set and his first Topps flagship card can be found in the 2009 update set.  He has Yankees cards in several 2018 Topps offerings.