The Phillies started Friday with two catchers on their 40-man roster, J.T. Realmuto and Rafael Marchan, and ended the day with four.  Donny Sands was acquired from the Yankees in a deal announced a little after 6pm.  Less than two hours later, the team announced the acquisition of catcher Garrett Stubbs from the Astros for outfielder Logan Cerny.
Cerny was the Phillies' 10th round pick this past June and he only appeared in 13 games professionally with the club, batting .200 (7 for 35).
Stubbs last appeared with the Astros in Game 6 of the World Series, inserted into the game in the ninth inning at catcher shortly before the Braves won the game, 7-0, winning the Championship in the process.  In three seasons with the Astros, Stubbs appeared in 51 games, batting .182 with no home runs and six RBIs.  He's played both corner outfield positions as well as catcher.  Stubbs' rookie card can be found in the 2020 Topps set, and more recently he's appeared in the 2021 Topps Heritage High Numbers and 2021 Topps Update releases.
Posted by Jim at 8:00 AM No comments:

After adding four players to their 40-man roster earlier in the day, the Phillies completed their first trade of the 2021-2022 offseason, adding catching and bullpen depth.
The Phillies acquired Nick Nelson (rhp) and Donny Sands (c) from the New York Yankees for minor leaguers Joel Valdez (lhp) and T.J. Rumfield (1b).  Nelson and Sands are now on the Phillies' 40-man roster, bringing the current tally up to 38.  Valdez pitched for the DSL Phillies this past summer and had a 1.63 ERA over 15 starts and 55 1/3 innings pitched.  Rumfield was the team's 12th round pick in 2021 and he hit .250 in 27 games for Low-A Clearwater.  I don't have baseball cards for either Valdez or Rumfield.
Nelson has appeared in 22 games for the Yankees over the past two seasons, going 1-2 with a 6.43 ERA over 35 innings pitched.  He's struck out 40 and has 27 walks.  He's on a Rookie Stars card in the 2021 Topps Heritage set, and he earned his first mainstream solo card in the recently released 2021 Topps Update set.  Sands is intriguing as he gives the Phillies some much-needed catching depth.  In 94 minor league games last season, he batted .261 with 18 home runs and 56 RBIs.  Behind J.T. Realmuto, the Phillies will now have Rafael Marchan, Sands and Logan O'Hoppe as potential back-ups for 2022.  Sands first appeared in a mainstream baseball card set back in 2016 with the Bowman Chrome release.
Posted by Jim at 7:00 AM No comments: 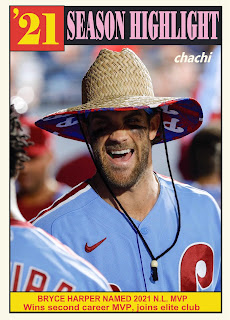 On Thursday evening, the greatest player in Phillies franchise history, Mike Schmidt, announced the winner of the 2021 National League MVP Award live on the MLB Network.  Having Schmidt announce the award fortunately turned out to be something of a spoiler as he gleefully announced Bryce Harper as the award's recipient and the latest member of the Phillies small fraternity to win one of the league's highest annual honors.
Surrounded by family and friends, Harper was visibly moved and got emotional after the announcement.  It turned out the vote wasn't that close, with Harper receiving 17 first place votes and 348 points overall.  The Nationals' Juan Soto finished second with six first place votes and 274 points, while Padres shortstop Fernando Tatis, Jr. received a pair of first place votes and 244 points to finish third.  Harper won the award previously in 2015, making him the fifth player in baseball history to win the award with two different franchises, joining Alex Rodriguez, Barry Bonds, Frank Robinson and Jimmie Foxx.
On Wednesday night, Zack Wheeler was robbed (in my opinion) of a Cy Young Award as the Brewers' Corbin Burnes won in the National League.  Wheeler was the only other Phillies to receive MVP votes.
Harper claims the eighth MVP award in Phillies franchise history, and I'm excited to see all the MV3 merchandise for sale at the ballpark in 2022!
Phillies MVP Winners
Posted by Jim at 7:45 PM No comments: