The long list of Phillies offseason comings and goings got a little longer on Friday when the team claimed left-handed reliever Bobby LaFromboise off waivers from the Los Angeles Angels. LaFromboise appeared in 11 games last season for the Pirates, pitching to a 1.13 ERA over eight innings.  This is the fourth time in two years that he's been plucked from the waiver wire, having bounced from the Mariners to the Padres to the Pirates to Angels to the Phillies.

To make room for the new reliever on the 40-man roster, former top prospect Jesse Biddle was designated for assignment.  Biddle, who is from Philadelphia, was the team's #1 pick in 2010, but injuries have hampered his professional career so far.  He's set to miss the entire 2016 season following Tommy John surgery.

Finally, a few other former Phillies found homes this past week when the Rangers signed Jordan Danks and the Cubs signed Jonathan Pettibone. 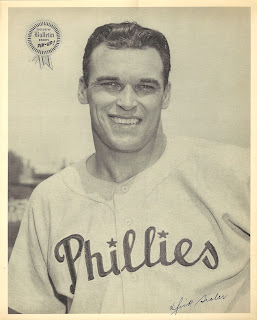 Today would have been my Dad's 72nd birthday.  There's not a day that goes by that I don't think of him or wish that I could tell him something.  He would have loved the new Star Wars movie and he'd be amazed at how quickly his grandsons are growing up.  His oldest grandson Doug is showing signs of the athleticism that he possessed, although those skills skipped a generation since they missed me. Doug keeps busy with soccer and basketball and he'll enter his second year of Little League in the spring.

Dad's youngest grandson Ben is a knowledge sponge, soaking in everything he can about the 50 states and anything else that interests his five-year-old brain.  Ben says and does things on a daily basis that would send my Dad into hysterics.

As a continuing tribute to him, here's a Dick Sisler item I've never featured on this blog.  Sisler and Del Ennis were his favorite players as a kid and I never miss an opportunity to add one of their cards to my Phillies collection.

We miss you Sir and we'll be thinking about you today.
Posted by Jim at 8:50 AM No comments:

Email ThisBlogThis!Share to TwitterShare to FacebookShare to Pinterest
Labels: 1950, Sisler

It's probably no less active than any other January for the Phillies, but this January has seemed to be particularly quiet.  I didn't even receive a notification on my phone announcing the latest non-roster invitee signing yesterday afternoon, but I caught news of the signing on Twitter.

Outfielder David Lough joins the stable of non-roster invitees who will join the Phillies in Clearwater in a few weeks.  Lough appeared in 84 games for the Orioles last season, hitting .201 with 4 home runs.  Unless there's a rash of spring injuries, I imagine Lough open the season in the outfield for the IronPigs.  He's appeared on his share of recent baseball cards, with appearances in the 2014 Topps Heritage, 2014 Topps Update and 2015 Topps sets.

Email ThisBlogThis!Share to TwitterShare to FacebookShare to Pinterest
Labels: 1965, 2014, Lough

Earlier Than Ever, Here are the New Uniform Numbers

In an unusual move, and a move that I suspect was designed by the Phillies solely to personally delight me, new players were assigned uniform numbers upon their arrivals beginning in mid-November.  There was another update to roster numbers in early December and then one-off updates as additional non-roster invitees were added.  In years past, the roster page on the Phillies website had the dreaded "--" in place of any uniform number for new arrivals until mid to late January.

As of this writing, there are still some corrections needed.  The Phillies currently have assigned #78 to non-roster infielders Angelys Nina and Brock Stassi.  Similarly, #61 is currently assigned to both pitcher Greg Burke and assistant coach Jorge Velandia.  I'm sure these duplicate assignments will be fixed before pitchers and catchers officially report on February 18th.  Finally, non-roster invitee Cedric Hunter doesn't even appear on the Phillies website yet and he'll need a number once spring training starts.

As I've done in the past, here's a look at the new uniform numbers for the 2016 edition of the Phillies. (Buckle up, because this is quite the long list.)

New Players - Under 60 Division
#2 Tyler Goeddel - Both Ben Revere and Chase d'Arnaud wore this number last season.  It's a good sign for Goeddel's chances of sticking with the Phillies that they assigned him such a low uniform number.

#15 Emmanuel Burriss - Burriss is going with the number last worn by Jordan Danks, since the #16 he wore last season with the Nationals is currently occupied by Cesar Hernandez.
#17 Peter Bourjos - Neither of Bourjos' prior numbers (#25 and #8) were available, so he takes over the number last worn by Brian Bogusevic.
#19 J.P. Arencibia - The last Phillies player to wear #19 was Tony Gwynn, Jr. in 2014.
#21 Ryan Jackson - Adam Loewen wore this number last season.
#28 Vincent Velasquez - Both Kevin Correia and Erik Kratz wore #28 in 2015.  Velasquez had worn #67 with the Astros last season.

#30 David Hernandez - Reliever Justin De Fratus had worn this number for the past two seasons.  Hernandez has worn this number with the Diamondbacks since 2011.
#31 Michael Mariot - Jerome Williams wore #31 for the past two seasons.  Mariot had previously worn #48 with the Royals.
#34 Brett Oberholtzer - Oberholtzer's more familiar #39 was unavailable, so he takes over the number last worn by Aaron Harang.  The pitcher first wore #65 in 2013 when he made his debut with the Astros.
#38 Andrew Bailey - Bailey had worn #38 last season for the Yankees.

#40 James Russell - Non-roster invitee Russell takes over the number he's worn during six seasons with the Cubs, which means the old #40, Aaron Altherr, needs a new number.  (See below.)
#41 Ernesto Frieri - Originally assigned #44, Frieri assumes Wall of Fame member Charlie Manuel's number.  No player or coach had been assigned Manuel's number since the former manager's firing in August 2013.  The last Phillies player to wear this number was Gavin Floyd in 2004.  Frieri's switch to #41 was made after the Phillies had signed Edward Mujica.
#44 Edward Mujica - The often injured Jonathan Pettibone was the last player to wear this number.  Mujica last wore #44 as a member of the Cardinals in 2012 and 2013.
#47 Charlie Morton - Sean O'Sullivan's old number went to Morton, whose more familiar #50 is currently occupied by Hector Neris.  Let's watch to see if a deal is struck for Neris' #50 given Morton's veteran status.

#53 Daniel Stumpf - Ken Giles won't be needing #53 with the Phillies anymore, so his old number went to Stumpf.
#56 Frank Herrmann - Nefi Ogando and Cesar Jimenez both wore this number last season for the Phillies.
#58 Jeremy Hellickson - The franchise's all-time saves leader won't be needing #58 this season, so Hellickson takes over the number.  Hellickson had previously worn this number with the Rays and Diamondbacks.

Phillies in Number Only
#30 A.J. Achter - Achter was property of the Phillies for less than a month this offseason before his roster spot was needed by Morton.  The roster page had assigned #30 to Achter before it ultimately went to David Hernandez.
#38 Dan Otero - Otero briefly assumed the number worn by Chad Billingsley in 2015.  The Giles trade required a roster opening and Otero was traded to the Indians for cash.

Highest number - Not counting Dalier Hinojosa and his #94, catcher Logan Moore wins the award this year with his #84 assignment.

Numbers available - The only real number under 60 currently available is the #3 worn by Jeff Francoeur last season.  As has been the case for the Phillies in recent years, they'll do everything to avoid assigning numbers of greats who have recently departed.  For that reason #11 (Jimmy Rollins), #26 (Chase Utley) and #35 (Cole Hamels) have yet to be reassigned and they most likely won't be in 2016.

Pitchers and Catchers Report One Month from Today #SpringTraining

I was happy to see that both Ken Griffey, Jr. and Mike Piazza were voted into the Hall of Fame last week and their election had me checking my Phillies baseball card inventory for their "Phillies" cards.  I'm sure there are other cards out there featuring both Griffey and Piazza with former Phillies players, but these are the cards I have currently in my collection.

As in the norm, I'll leave the reporting on these players' accolades to the experts.  What I'm most interested in is looking at their available baseball cards.

Mark Appel (rhp) - Acquired in December from the Astros in the Ken Giles deal, Appel will receive his first Phillies cards in 2016.

J.P. Crawford (ss) - I already have 22 cards of the Phillies top prospect in my collection.  He appeared on several Bowman inserts from 2015 along with cards in the Topps Pro Debut and Topps Heritage Minor Leagues sets.

Gabriel Lino (c) - Lino has been appearing on Phillies minor league cards since 2012 and he's in both the 2015 Lehigh Valley IronPigs and Reading Fightin Phils team sets.

Logan Moore (c) - Moore has been around for a while, first appearing on a Phillies card back in 2011.  He's also in the 2015 Reading Fightin Phils team sets.

Brock Stassi (1b) - Like Moore, Stassi has been appearing on Phillies minor league cards since 2011 and his 2015 cards can be found in the Reading Fightin Phils team sets.  He has yet to appear within a mainstream baseball card issue.

Nick Williams (of) - Like Thompson, Williams' first Phillies card can be found in the Reading Fightin Phils Holiday Set.  I would suspect we'll see a lot more Phillies cards for both Thompson and Williams in 2016.

There has been little to no Phillies news for the past few weeks, which is why I got excited yesterday morning when my Twitter feed started percolating with Tweets from the Phillies beat writers.  The news wasn't all that major, unless you happen to be a Cedric Hunter super collector.  Hunter, the sole outfielder among the now 14 Phillies non-roster invitees, will be joining the team in a little over six weeks in Clearwater.

Hunter spent all of last season with the Braves Triple-A club in Gwinnett, hitting .283 in 138 games with 12 home runs and 77 RBIs.  His sole big league experience in his 10 year professional career came in 2011 when he appeared in six games for the Padres.

With the addition of Hunter, the camp headcount now stands at 54.  Also of note is the fact that the Phillies, earlier than ever, have assigned new uniform numbers to the herd of new additions joining the roster so far this offseason.  Every player except Hunter has been assigned a uniform number per the Phillies website.  I'll have a post up soon looking at the uniform number assignments.

Makes me want to hug someone.
Posted by Jim at 7:00 AM No comments: