The Phillies added their 21st non-roster invitee yesterday, announcing the signing of catcher Ryan Hanigan to a minor league contract with an invitation to spring training.  Hanigan served as a back-up catcher in Boston for the past two seasons, and he's logged 10 years in the Majors with the Reds (2007-2013), Rays (2014) and Red Sox.  His most recent baseball cards can be found in the Topps flagship and Heritage Hi Numbers sets.

Hanigan will provide some catching competition to the other potential back-ups in camp - Jorge Alfaro, Bryan Holaday and Andrew Knapp.

Email ThisBlogThis!Share to TwitterShare to FacebookShare to Pinterest
Labels: 2016, Hanigan

There will be five inductees to the Hall of Fame this summer in Cooperstown.  Unlike the last time I watched election results come in, the recent announcement that Jeff Bagwell, Tim Raines and Ivan Rodriguez received enough votes to make them Hall of Famers brought a smile to my face.  I'm not thrilled with, nor do I fully understand, the inclusion of former Commissioner Bud Selig in this year's class.  Rounding out the five inductees this year is former Braves General Manager John Schuerholz.

Each year when the new class is announced, I like to check my Phillies baseball card collection to see if any of the new Hall of Famers are represented.  I have no cards of Selig or Schuerholz in my collection, but I do have cards of the three players elected.

Jeff Bagwell
I only have one card of the Astros great in my collection and it's from the strangely titled Glamour Boys insert set from 2001 Fleer Triple Crown.

Tim Raines
Raines appears on two different Topps Rub Downs in 1984 and 1985 that also happen to have Mike Schmidt on them.  He's also on a Doubles & Triples Superstar Special card with Juan Samuel in the 1987 Fleer set.

Ivan Rodriguez
The Pudge cards in my Phillies collection come courtesy of Darren Daulton's big year in 1992.  I have four insert cards from 1993 featuring this catching tandem, and another card from the 1995 Donruss Dominators insert set.

On Thursday, the Phillies officially signed outfielder and former All-Star Michael Saunders to a one-year deal worth $9 million.  Saunders crosses left-handed, middle of the line-up power hitter off the Phillies off-season to-do list, and his arrival means that Phillies Room favorite Roman Quinn most likely starts the season in the minors.

I admittedly don't know a lot about Saunders, other than that he enjoyed a career year last season with the Blue Jays, hitting 24 home runs and driving in 57.  I was surprised to learn he's an eight-year veteran with his first six seasons spent in Seattle.  I was also surprised to see he had relatively few mainstream baseball card appearances in 2016.  His cards can be found within the Topps flagship, Heritage and Update sets.

To make room on the 40-man roster for Saunders, pitcher Severino Gonzlaez was designated for assignment.

Phillies Now Up to 20 Non-Roster Invitees

In a sure sign that we're inching closer to spring training, the Phillies announced 15 new additions to the non-roster invitee list yesterday.  I had originally missed the addition of left-handed pitcher Cesar Ramos, as he was signed to a minor league contract back on January 5th.  The majority of these players spent the bulk of 2016 within the Phillies organization, and the most notable name on the list is top prospect J.P. Crawford.

Here's a run-down of the now 20 players who will be wearing numbers in the 70s and 80s when camp breaks in February.

I was a little bummed back on December 2nd when it was announced that Cody Asche had been designated for assignment.  The move made sense, but Asche had been one of the more popular Phillies players over the past few years and he had assumed the quasi-official role as one of the team's spokesmen.  I believe he was one of the players this year (or maybe last year) who took the mic on fan appreciation day to thank the fans for their loyalty.  He seems like a good guy.

On Friday, Asche signed a minor league contract with the White Sox and he'll try to resume his career in the American League.

I pride myself in having a fairly complete collection of Phillies baseball cards from the 1980s.  Cards from the major manufacturers - Topps, Fleer, Donruss and later Score and Upper Deck - are cheap and fairly easy to find.  But there are still a few oddballs from the decade that have eluded my collection.  I've already documented the 10 fantastic vintage Phillies cards my Mom added to my collection as part of the Santa Brings Way Too Many Awesome Baseball Cards to Jim (SBWTMABCTJ) extravaganza, but she also tracked down two cards from more recent times that I have never seen available for sale.

In 1986, packages of Keller's butter sold within the Philadelphia area came with one of six Phillies cards on the package.  I've been unsuccessful in adding the Mike Schmidt card to my collection since I first became aware of these oddballs back in 2011.  This Schmidt card completes my six-card set, and the other cards in the set are linked below.

Another difficult to find (for me) food-issued oddball is the Von Hayes card from the 1988 Drake's set.  There are three Phillies cards within the 33-card set - Hayes, Juan Samuel and Mike Schmidt - and the cards were printed on the backs of Drake's snack products.  The Samuel and Schmidt cards have been in my collection for close to 30 years, but I could never track down the Hayes card.

Leave it to Santa (with help from my Mom) to track down these two cards and finally add them to my collection.  They're just little pieces of cardboard to most people, but to this day my Mom still knows exactly how to make me smile.

My wife and kids purchased a 2016 Topps factory set for me for Christmas and while this year's flagship design isn't my favorite, I still enjoyed looking through the set.  I believe in the adage of "Once a Phillie, Always a Phillie" which is why as I was going through the set I found myself absent-mindedly setting aside the past, current and future Phillies.  I ended up with a nice little stack of cards and for no other reason than I find this stuff interesting and entertaining, here's a list of the cards with Phillies connections in the 2016 Topps factory set, with the cards from the Update series thrown in for good measure.

This list will grow in future years, and I'm including four players (marked with an *) who haven't officially suited up for the team yet.

At some point in the coming weeks, I'll take a closer look at the 2016 Topps Phillies cards.  Until then, this page links to all my past Topps Phillies posts.

Thanks Santa! Time to Update My Most Wanted List (#SBWTMABCTJ)

We made it!  It's 2017 and the sun is (sort of) shining, the coffee is hot and I've decided to spend the first day of the year sorting baseball cards.  My first order of business is to once again completely update my Ten Most Wanted - Vintage list on the sidebar, which until the day after Christmas looked like this: 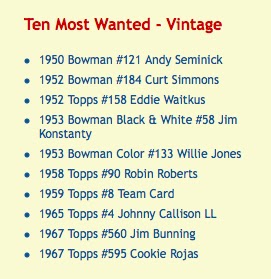 For the past six Christmases, my Mom has been chipping away at my Phillies team set needs one card at a time.  For as long as I can remember, Santa (with help from my parents I suppose) has gifted me with amazing baseball cards each and every Christmas morning.  Through my college years, the Dark Times and even after I had married and had kids of my own, my Dad continued the tradition of hunting down baseball cards that would amaze me and become treasured additions to my collection. My Mom has continued that tradition since my Dad passed away in 2011.

She truly outdid herself this year for the annual Santa Brings Way Too Many Awesome Baseball Cards to Jim (SBWTMABCTJ) extravaganza, completely wiping out my Ten Most Wanted - Vintage list.  Here's a run-down of the 10 vintage cards from this year's haul.  (Click on any of the photos of the cards to enlarge.)

1950 Bowman #121 Andy Seminick
This brings me down to needing just two more cards to complete the 1950 Bowman 19-card Phillies team set.  Once I have the final two cards, I'll definitely be showing off the complete set in a gallery-style post.

1952 Bowman #184 Curt Simmons
I'm also close to completing the 16-card Phillies team set from 1952 Bowman.  After adding this Simmons card to my collection, I'm only four cards away.  The back of this card references Simmons' return from military service.  Although it's slightly miscut, this may be my favorite card of the bunch.

1952 Topps #158 Eddie Waitkus
The bio on the back of this card begins, "Shot by a crazed girl in June, 1949, Ed was close to death." Most of the remaining Phillies cards I need from the 1952 Topps set are from the scarce and pricey high number series.

1953 Bowman Black & White #58 Jim Konstanty
1953 Bowman Color #133 Willie Jones
It's always exciting to add cards of any of the Whiz Kids to my collection.  I've seen these two cards for years both at baseball card shows and online, and it's a fantastic feeling to have them both in my collection now.  Kids opening packs of baseball cards in 1953 had no idea how good they had it.

1958 Topps #90 Robin Roberts
1959 Topps #8 Phillies Team Card
With the exception of cards needed from the 1952 Topps set, I'm surprisingly close to having a complete run of Phillies cards from the Topps sets of the 1950s.  I'm pretty sure I have this Roberts card in my collection in reprint form, so it's nice to finally have the original.

1965 Topps #4 N.L. Home Run Leaders
Johnny Callison's head appearing in the bottom left of this card meant that I needed it to complete my 1965 Topps Phillies team set.  It's also great to have an excuse to add a card featuring three Hall of Famers (Willie Mays, Billy Williams and Orlando Cepeda) to my collection.

1967 Topps #560 Jim Bunning
1967 Topps #595 Cookie Rojas
Wrapping up the vintage portion of the annual SBWTMABCTJ are two Phillies cards I needed for my 1967 Topps team set.  These are both from the tougher high-number series, and the Rojas card is a close runner up to the 1952 Bowman Simmons card as my favorite addition.

But wait, there's more!  My Mom also crossed off two extremely oddball wants from my Ten Most Wanted - Modern list and I'll feature those two cards in a future post.
Posted by Jim at 12:00 PM 2 comments: