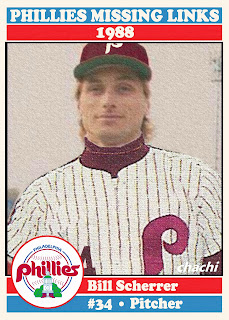 This is a continuing series looking at those players who spent time with the Phillies but possess no baseball card proof of their time in Philadelphia.  I will make my way through the decade of the 1980s first and then work my way forward.  In some cases, the First and Last Mainstream cards listed above have been subjectively chosen if multiple cards were released in that year.
Posted by Jim at 7:00 AM 2 comments:


Thanks to a tip and a series of e-mails from fellow collector Burnell, I was made aware of several 2015 Topps Phillies variations to be found within the Topps Bunt App.  I have no idea how this App actually works, but I do know that it seems to be very popular.  From the official description from the Topps website:


Topps BUNT is the only real-time, real world Major League Baseball digital trading card game where the cards you own and collect earn points based on how your players perform on the field each day. Download BUNT for your iPhone, iPad or iPod touch on the App Store.

Burnell sent me the scans shown in this post, and based on these cards I may have to give the App a try in 2016.  The design is the same as the 2015 flagship design with the exception of the Phillies "P" replacing the primary logo on the front and some dots appearing along the right borders.  Several Phillies players who were inexplicably omitted from the 2015 Topps Update set have cards available through the App, and I'll probably eventually print these to be added to my 2015 Phillies binder.

Interestingly enough, the images for Luis Garcia and Severino Gonzalez are swapped.

Almost five years ago, I started the process of composing a series of posts on the Phillies cards found within each of the Topps flagship sets dating back to 1951.  With this post on the 2015 Topps Phillies cards, I'm finally current and I'll continue this series as long as this here blog is still chugging along.

The Set
Number of cards in the set:  Topps super-sized its set in 2015, with 350 cards each in Series 1 and Series 2 and an all-time high 400 cards in the Update Series.  That's 1,100 base cards and easily two binders worth of nine-pocket pages if you're ambitious enough to go that route.
My very brief thoughts on the set:  I really like it.  It's so different from anything Topps has put out as its flagship set over the past decade and I appreciate the foil-less text on the fronts of the cards.  If I were to over-analyze the design . . . there's quite a lot going on here.  We've got color gradients, random line swiggles, some small white circles under the team name, the bottom border fading and bleeding into the bottom of the player's photo and a semi-transparent target around the team logo.  If I were to not over-analyze the design . . . it's pretty cool.

The backs are also easy to read and they have some personality to them, unlike the card back designs from the prior four years.

2015 Phillies
Record and finish:  The Phillies hit rock bottom in 2015, and their record of 63-99 was their worst mark since the 1969 season.  Finishing 27 games behind the Mets in the division, their record assured them the #1 pick in the June 2016 amateur player draft.
Key players:  Odubel Herrera, a Rule 5 pick from the Rangers who had never played above Double-A before this season, led the Phillies with a .297 average.  Ryan Howard led the team with 23 home runs and 77 RBIs, but hit a lowly .229.  Maikel Franco established himself at third base hitting 14 home runs in 80 games before a broken hand shortened his season.  Cesar Hernandez, Freddy Galvis, Jeff Francoeur and Andres Blanco were all pleasant surprises offensively.

Key events:  The Phillies were sellers following the All-Star break, trading away Jonathan Papelbon (to the Nationals), Hamels and Jake Diekman (to the Rangers), Ben Revere (to the Blue Jays), and most painfully Chase Utley (to the Dodgers) for a boatload of prospects.  In his final start with the Phillies, Hamels threw a no-hitter against the Cubs on July 25th.  Manager Ryne Sandberg quit the team on June 26th, unable to put up with the losing any longer.  Third base coach Pete Mackanin took over on an interim basis, and was named the permanent manager late in the season.

2015 Phillies in 2015 Topps
Who's in:  The expanded set size led to only 31 Phillies cards, up two from last year's 29 and up one from 2013's 30 cards.  There's a great short-printed, photo variation card available for Utley featuring him on the dugout steps of Citi Field during a more peaceful time.  There's also a short-printed Phillies card in the updated series featuring Rally Squirrel II, the second squirrel to interrupt a Phillies-Cardinals game.  (This incident took place back on June 19th.)

Hernandez, who had a great season filling in all over the infield, was inexplicably omitted from the Update Series.
#US146 Aaron Harang, #10 Cole Hamels, #560 Jerome Williams, #218 David Buchanan

Who's out:  See my commentary above.  Catcher Cameron Rupp, who received the bulk of the playing time in the second half behind the plate, was left out.  Rookie Aaron Altherr was also omitted.
Phillies on other teams:  Not counting the players who left the Phillies during the season, there are no 2015 Phillies on other teams.
What's he doing here:  Miguel Alfredo Gonzalez, who pitched 5 1/3 innings for the Phillies in 2014 and missed the entire 2015 season due to injury, has no business receiving a card in this set.

For the first time in several years, I have to take issue with Topps' Phillies player selection.  With so many rookies making their debuts in 2015, there was quite a crop of Phillies prospects Topps could have featured in the Update Series.  Instead, we received Phillies cards of O'Sullivan (1-6, 6.08 ERA in 13 starts) and Aumont.  The Aumont card is especially annoying since he was released in June by the Phillies, signed by the Blue Jays organization and then released by them prior to the end of the season.

Cards that never were candidates:  And there's a lot . . . Nola, Morgan, Hernandez, Rupp, relievers Justin De Fratus, Jeanmar Gomez and Luis Garcia for starters.  Prospects acquired in trades who could have feasibly had cards in the Update Series include Eickhoff and Darnell Sweeney.

I recently received an e-mail from reader/Phillies fan Burnell who informed me there were several variations of 2015 Topps Phillies cards to be found within the Topps Bunt app.  I have yet to venture into Topps Bunt world, but after seeing some of the scans that Burnell e-mailed to me, I might have to give it a try.  Courtesy of Burnell, I'm going to have another post up soon showing some of the 2015 Topps Phillies variations to be found within Topps Bunt.

Favorite Phillies card:  I love the Rollins/Schmidt card just because it features two franchise icons celebrating Rollins ascension to the franchise's all-time hit king.  If I had to pick a favorite player card, it would be a tie between Hamels and Utley since these are last Topps Phillies cards as active players.

Other Stuff
Variations:  Utley is the winner here, with three different photos used across three different sets. The photo of him in a throwback uniform was also used on his Topps Opening Day Franchise Flashback insert card. 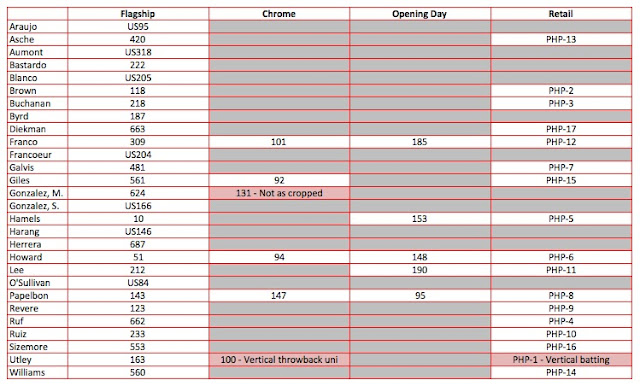 Doug finished this set on October 31, 2015 at the Fanatics Authentic Sports Spectacular in Oaks, Pennsylvania.
Posted by Jim at 11:00 PM 2 comments:

Email ThisBlogThis!Share to TwitterShare to FacebookShare to Pinterest
Labels: 2015, O'Sullivan

"US" prefix in front of all card numbers.

Completed in November 2016, thanks to Doug's grandmother.  Cards needed were received at Doug's 10th birthday party.

Thanks to Section 36 and Dan from The Other World for taking a chunk out of this list!
Posted by Jim at 8:00 PM 3 comments:

Thanks to Section 36 for taking a chunk out of this list!  And thanks to reader Burnell for sending along a few cards as well!
Posted by Jim at 2:30 PM 2 comments:

Email ThisBlogThis!Share to TwitterShare to FacebookShare to Pinterest
Labels: 1983, 2015, Schmidt

Yesterday, the Phillies introduced Matt Klentak as their new general manager, succeeding Ruben Amaro, Jr. who was dismissed in September.  Klentak comes to the Phillies after serving four years as the Angels assistant GM (2012-2015) and four years as director of baseball operation for the Orioles (2008-2011).  Current team president Any MacPhail worked with Klentak while both were with the Orioles.

I'm excited about this move and at the very least the Phillies seem to be embracing the analytical side of the game that has been previously embraced by so many teams.  I'll admit though, it was weird making a custom baseball card for a dude who is (a) younger than me, (b) in a suit and (c) looks as if he could be working a few doors down from me in my office.  For some reason, making fake baseball cards for actual players in their twenties and thirties is fine, but making a fake baseball card for Klentak felt weird.

I thought I should also post the Highlight card I made for manager Pete Mackanin upon the removal of his interim title.  No one knows what the 2016 season has in store, but the two guys at the top of this post - Klentak and Mackanin - will be front and center.

In a strange but true move, Amaro, Jr. has been hired by the Boston Red Sox as their new first base coach.  I guess he just wanted to be closer to Section 36?
Posted by Jim at 11:00 AM 2 comments: 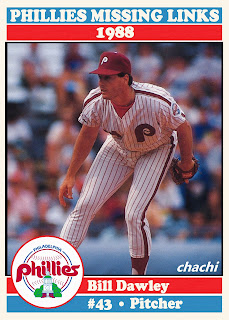 This is a continuing series looking at those players who spent time with the Phillies but possess no baseball card proof of their time in Philadelphia.  I will make my way through the decade of the 1980s first and then work my way forward.  In some cases, the First and Last Mainstream cards listed above have been subjectively chosen if multiple cards were released in that year.
Posted by Jim at 7:00 AM No comments: