First Phillies Moves of the Offseason

While nine teams were gearing up for the postseason (sorry Twins), the Phillies were busy making their first roster moves of the offseason.  Phillies Room favorite Ty Kelly was outrighted off the 40-man roster and opted for free agency.  Joining him on the outright and opt for free agency list were pitchers Henderson Alvarez and Kevin Siegrist.  The moves drop the number of players on the 40-man roster down to 37, with seven players still on the 60-day disabled list.

Kelly had a knack for coming up with clutch hits throughout the season, and in 69 games he hit .193 (17 for 88) with a pair of home runs.  His playing time dwindled with the arrival of several top prospects, and the last game Kelly started was way back on July 16th.  He earned two Phillies cards for his efforts - one in the team-issued update set and the Topps Now card featured here showcasing his game-winning hit from July 29th.  Kelly is a favorite in our household as he never denied an autograph request from our son Doug throughout the season.

Siegrist had seven relief appearances with the Phillies following the team picking him up on a waiver claim on September 2nd.  Alvarez started three games for the Phillies in his first big league action since 2015.  He went 0-1 with a 4.30 in those three starts.  Both Siegrist and Alvarez join the long and distinguished list of former Phillies Missing Links, as neither of them will likely ever appear on an official Phillies baseball card.

Email ThisBlogThis!Share to TwitterShare to FacebookShare to Pinterest
Labels: 2017, Kelly

One Sentence Summary:  In Pete Mackanin's final game as manager, the offense exploded and four Phillies pitchers shut down the Mets in an 11-0 win.

What It Means:  Pitchers and catchers report to Clearwater in about 4 1/2 months.  The Phillies will pick third in the 2018 amateur player draft in June.

What Happened:  Mackanin received a standing ovation prior to the game when he took out the starting line-up to the umpires at home plate.

The Phils scored six in the fourth inning, capped by Maikel Franco's three-run home run (24).  Nick Williams hit an inside-the-park home run (12) in the eighth, scoring the final three runs of the game.  Freddy Galvis pinch-hit in the sixth, making him the first Phillies player since Ryan Howard in 2008 to appear in all 162 games.

Featured Card:  Williams capped the long season with a mad dash around the basepaths in the eighth, and he'll be part of the new and improved Phillies line-up in 2018.

Memory Lane - Game 162
Hard to believe, but this is my ninth season of posting daily (or semi-daily) on the Phillies and their trials and tribulations.  I'll be back in 2018 and thank you to everyone who visited, commented and shared your stories of Phillies fandom throughout the season.  I'm looking forward to publishing some postseason game summary posts next year!

October 4, 2009 - Catcher Paul Hoover singled in the winning run in the 10th in a 7-6 win over the Marlins.
October 3, 2010 - The Phillies lost 8-7 to the Braves in their final tune-up before facing the Reds in the N.L.D.S.
September 28, 2011 - The Phillies closed out the 2011 regular season with a 13-inning victory against the Braves, setting a franchise record with their 102nd regular season win.
October 3, 2012 - The Phillies closed out their 2012 season with a lethargic 5-1 loss to the N.L. East Champion Nationals.
September 29, 2013 - Zach Miner got the ball for the Phillies and lasted 2 1/3 innings in a 12-5 loss to the Braves.
September 28, 2014 - Cole Hamels pitched another fine game and suffered through another outing with minimal run support.
October 4, 2015 - Phillies avoid 100 losses and Ichiro makes his pitching debut in a 7-2 victory.
October 2, 2016 - Phillies bid an emotional farewell to franchise icon Ryan Howard.
October 1, 2017 - Phils clobber Mets in Pete Mackanin's final game as manager.

Want to revisit every game of the 2017 season?  My handy game summary index can be found here.
Posted by Jim at 7:00 AM 2 comments: 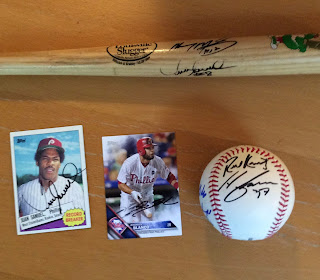 One Sentence Summary:  Ben Lively finished up his season with a strong start as the Phillies rode three home runs to this 6-2 win over the Mets.

What It Means:  With this win, the Phillies are 36-37 since the All-Star break, having started the season at 29-58 prior to the break.

What Happened:  Lively scattered six hits over six innings of work while allowing only two runs.  Maikel Franco hit a two-run home run (22) in the second, and Jorge Alfaro (5) and Cesar Hernandez (9) added solo shots in the sixth.

Featured Card:  I, along with most Phillies fans and seemingly the entire Phillies team and coaching staff, was shocked on Friday afternoon when the announcement was made that manager Pete Mackanin would not be returning in 2018.  Mackanin was given a contract extension in May and he was seemingly in place (along with his coaching staff) for the long haul to see the rebuild through to fruition.  General Manager Matt Klentak had other plans.  Mackanin will move into a front office role and the coaching staff will be free to pursue other opportunities following Sunday's season finale.

In an awkward and not entirely revealing press conference, Klentak said he had decided that now was the right time to make this change.  This in spite of the team playing great together in the second half after dumping players Klentak had added and replacing them with players Klentak had not had a hand in acquiring or drafting.  I'm skeptical of the Phillies' GM to say the least.

Mackanin was unexpectedly thrust into the position when Ryne Sandberg decided he wanted no part of a rebuilding process.  He did an admirable job and to see him unceremoniously dumped when the team was seemingly coming together is jarring.  I like the guy and I like his coaching staff, especially Larry Bowa, Juan Samuel and Mickey Morandini.  To see those guys cast aside in favor of a "new and improved" manager and coaching staff is discouraging.

Of course I'll change my opinion on Klentak if his next moves ultimately lead to another parade.