Nobody, and I mean nobody that I knew in my small 2nd grade collecting circle wanted anything to do with the 1982 Fleer Stamps set.  The 1982 Topps Stickers were bigger, had better pictures and had color borders.  The 1982 Fleer Stamps set was a little off somehow, and if you decided to lick the backs and affix the stamps to their spots in the stamp album, you might end up feeling a little woozy.

Still, I collected the stamps and I'll end the first ever Gallery Week with a look at the Phillies team set from this under appreciated early 80s oddball issue.  Any requests for the next Gallery Week?

There's a picture of me somewhere at 6 or 7 years old sitting in front of my bedroom door on 12th Street.  Every available space on the door is occupied by cards from the giant-sized 1980 Topps Superstar 5 x 7 set or the similar 1981 Topps Home Team or National 5 x 7 sets.  The set with the most Phillies in it was the 1981 Topps Home Team 5 x 7 set, appropriately named since the home team's cards were most readily available in that home team's market.  These cards still make me incredibly nostalgic.

I wanted to give my scanner a rest after the last gallery, which featured all the Phillies cards from the 1976 SSPC set.  We're leaving the 1970s and heading into the 1980s with the next set.

Along with the 1979 and 1980 Burger King Phillies set, the 1980 Kellogg's cards were the first true oddball cards to enter my collection back in the day.  I was never lucky enough to pull any Phillies from a box of Apple Jacks, and it was only until many years later that I added these cards to my collection.  I decided to enlarge the scans below a little to better display the cards in all their lenticular glory. 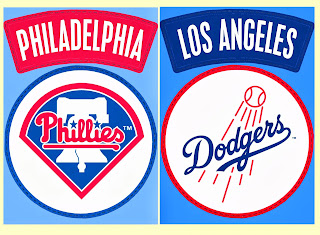 At the Ballpark:  In one of the best giveaways I've seen so far this season, all fans attending tonight's game will receive a Sandy Koufax bobble head.  The bobble head is sponsored by Philadelphia's own Mitchell & Ness.  Fireworks will follow tomorrow night's game.

1973 Topps Flashback:  Before I knew he pitched for the Dodgers, I knew the subject of today's flashback for his super fresh 1980s perm.  Claude Osteen was the pitching coach for the Phillies from 1982 to 1988, during which time he sported the unfortunate hair style choice.

No pitching probables or Phillies team leaders in this game summary post, as I'm currently away from The Phillies Room HQ and the blog is on auto-pilot.
Posted by Jim at 9:10 PM 2 comments:

The only reason I'm breaking this team set up into two galleries is because of Blogger's 20-label limit on posts.  It would have bugged me not to label some of the players featured.  Part one was published yesterday.

Jerry Martin received his "rookie" card in this set, as he didn't appear in a Topps set until 1977.  Wayne Simpson and Erskine Thomason receive their sole Phillies cards, even though they appear in the uniforms of the Triple-A Toledo Mud Hens, the Phillies top farm club in 1975.  Simpson appeared in 7 games for the 1975 Phillies, while Thomason pitched just one inning for the 1974 squad.

Dick Ruthven isn't in this gallery, even though his 1976 SSPC card features him wearing a Phillies uniform.  The back of Ruthven's card indicates he had moved on to the Atlanta Braves.

If you've been following along with The Shlabotnik Report, and you should be, you know there was a recent report of a 1,200-card haul of wonderful 1976 SSPC cards.  I hadn't planned on featuring the 1976 SSPC Phillies team set during Gallery Week, but his posts on the set inspired me to dig out my 1970s Phillies binder and take in the glory of these little known cards once again.  (I hope this doesn't steal TSR's thunder for any future posts.)

Jim Kaat is a member of the White Sox on the front of his card, but the back of his card lists him as a Phillie and mentions his acquisition on December 10, 1975.