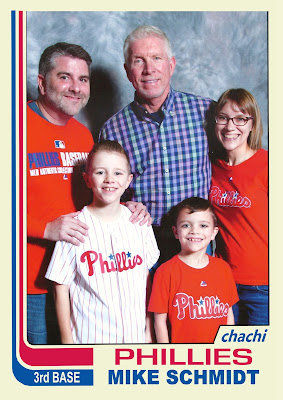 When we learned that Rhys Hoskins and Mike Schmidt would be signing autographs at the Valley Forge baseball card show this weekend, the entire family decided to make the trek for the occasion.  While our oldest son Doug is already a serious baseball card and autograph collector, our youngest son Ben hasn't quite taken the plunge yet.  It was Ben's first baseball card show and he was anxious to see what all the fuss was about.  My wife Jenna hadn't been to a baseball card show since before the boys were born.

The main goal of afternoon was to meet both Schmidt and Hoskins and perhaps also add autographs from the other show signers.  Steve Carlton, J.P. Crawford, Charlie Manuel and Pedro Feliz were all there, but the crowds were heavy (and the prices were high) so we limited our autographs to Hoskins and long-time Phillie Larry Bowa.  We opted for just a photo op with Schmidt.  The Hall of Famer was gracious and friendly to both boys and the picture of our family with him will feature prominently on the wall of the actual Phillies Room.


As for the baseball card haul from the show, both boys added their share of Phillies cards.  Ben added an autographed 8 x 10 photo of his favorite player, Ben Revere.  There was a booth giving away a free Lego mini figure to all kids, and that may have been the highlight of the show for Ben.  Ben also quickly discovered that many dealers were happy to give him free Phillies cards, especially more readily available cards of some of his favorite players like Hoskins or Carlos Ruiz.

Doug added several autographed Phillies cards to his collection and his proudest acquisition was a complete 1988 Donruss factory set for just $1.  He also had fun walking around (and negotiating with dealers) with his friends Jacob and Josh.  My purchases included: 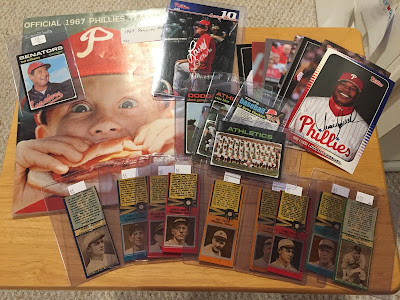 And speaking of which, I had the pleasure to finally meet fellow Phillies collector Steve F. who was there with his son Sam.  Steve - I hope you were able to get your 1980 Phillies poster autographed by Schmidt!  Overall, it was a great day!

What a great family adventure! I bet Ben will never forget that card show...message me if you’re interested in a stack of Phillies cards! I’d love to send them your way.

It was great to meet you, Mrs. Phillies Room, and Ben. We also got a picture with Schmitty, although since we didn't pay for the photo op but sneaked it in with our autograph, ours is less Christmas card-worthy than yours (but still a nice posed shot). It was a fun show!

Great to meet you as well Steve!