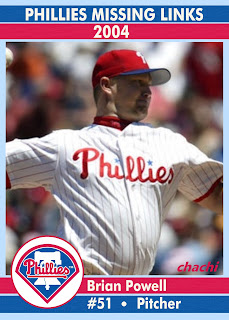 Even though he wasn't even a non-roster invitee in spring training, Brian Powell was one of the first pitchers to be recalled early in the 2004 season when injuries started to hit the Phillies bullpen.  Unfortunately, Powell pitched in just one game for the Phillies that May before an injury claimed him as well.  He returned from the disabled list on June 15th, taking a young Chase Utley's spot on the active roster.  After receiving two spot starts, Powell was sent back to the bullpen pitching middle relief and serving as the occasional long man until he landed on the disabled list again on August 19th.  He was activated on September 3rd as part of the roster expansion, but pitched only once more (on September 24th) the rest of the season.

In 2005, Powell pitched in 29 games for the Nationals' Triple-A team before his professional playing career ended.  He played in parts of six seasons in the majors with the Tigers, Astros, Giants and Phillies, compiling a career record of 7-18 and a 5.94 ERA.

For the second Missing Link in a row, we have a young baseball player who left us way too soon.  Powell committed suicide in 2009 at the age of 35.