On Monday night, up against an 8pm deadline to tender contracts to eligible players, the Phillies announced they had not tendered contracts to long-time third baseman Maikel Franco and second baseman Cesar Hernandez.  Both are now free agents and the Phillies are tasked with revamping half their infield over this offseason.  The graphic below from Meghan Montemurro's story in The Athletic shows where Franco and Hernandez rank in games played together among Phillies teammates since 2009.  They're the only tandem on this table to depart at the same time.  (Note that the games together tally is as of September 29th, so add a few more games to their total.) 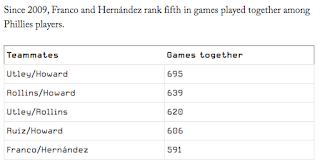 Hernandez came up first, making his debut on May 29, 2013.  His departure makes Odubel Herrera (for now) the longest tenured position player on the club.  Hernandez peaked with the Phillies in 2016 and 2017, enjoying his two best seasons, and he departs with a .277 lifetime average over seven seasons.  He was maddeningly inconsistent on defense and baserunning.

Franco, a favorite of my younger son Ben, was a September 2014 call-up and despite flashes of brilliance he never quite reached what was hoped to be star status.  He departs having hit .249 over 656 games and with a career home run total of 102 - averaging a little less than 23 per his 4 1/2 full seasons with the Phillies.  Looking through Franco's Complete Chachi Checklist below, it's remarkable to me how many times we interacted with him over the years either at the annual Phillies Phestival or during Photo Day/Night.  Even though he never quite lived up to expectations, he's earned a place as a Phillies Room favorite for his always cordial interactions with my sons.

The Phillies seem very interested in former Yankee Didi Gregorious, with new manager Joe Girardi publicly lobbying for his former player to come to Philly.  A Gregorious signing would most likely move Jean Segura to second base with Scott Kingery taking over at third.

Also on Monday, the Phillies claimed reliever Trevor Kelley off waivers from the Red Sox.  In 10 games with the Red Sox last season, Kelley was 0-3 with a 8.64 ERA over 8 1/3 innings.  A product of the University of North Carolina, he's had more success at the minor league level.  Kelley's baseball card appearances are scarce to date as he's only appeared in various Red Sox minor league team sets dating back to 2017.
Posted by Jim at 12:00 PM

I've been watching him Franco for a few years now... and I'm hoping he'll use this change in scenery to blossom.