One Sentence Summary:  The Phillies suffered a nightmarish loss as the Dodgers used back-to-back-to-back home runs to help overcome a three-run deficit in the ninth and eventually win the ballgame.

What It Means:  Manager Pete Mackanin summarized the loss saying, “It's one of the worst losses I've ever been associated with.”

What Happened:  Hector Neris was handed a 5-2 lead to work with, and he allowed home runs to Yasiel Puig, Cody Bellinger and Justin Turner to start the ninth.  Joely Rodriguez relieved Neris and the winning run scored on a ball that couldn't be handled by Maikel Franco.  Brutal.

Lost in the pain is the fact that Zach Eflin pitched extremely well, allowing just two runs on four hits in his seven innings of work.  Brock Stassi (2) hit a three-run home run in the fourth.  Andrew Knapp also hit a home run - his first in the majors.

Featured Card:  This Eflin card should have been posted in celebration of his first win of the 2017 season.  Eflin's strong pitching last season earned him two different Topps Now cards, including this card from July 22nd when he threw a complete game shutout against the Pirates.
Posted by Jim at 4:00 PM No comments:

Email ThisBlogThis!Share to TwitterShare to FacebookShare to Pinterest
Labels: 2016, Eflin 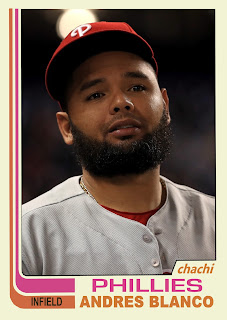 One Sentence Summary:  Kenta Meada held the Phils to five hits over seven innings and Justin Turner had a two-run double in the sixth in this 5-3 loss to the Dodgers.

What It Means:  The six-game winning streak is over.

What Happened:  Jerad Eickhoff lasted 5 2/3 innings, surrendering five runs on nine hits and he's still looking for his first win of 2017.  Freddy Galvis had another multi-hit game including a two-run double in the third.

Featured Card:  Mark Leiter, Jr. made his Phillies debut (see below) and he and his father join Ruben Amaro and Ruben Amaro, Jr. as the only father-son combinations in Phillies history.

Phillies Debuts:  Ty Kelly made his debut in the top of the seventh and Leiter, Jr. entered the game in the bottom of the seventh.  Leiter, Jr. became the tenth player to make his Phillies debut this season and the third (along with Brock Stassi and Andrew Knapp) to make his major league debut. 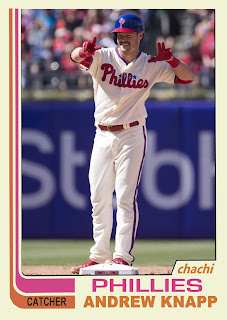 At the Ballpark:  It's a good weekend for giveaways at Dodger Stadium as all fans will receive a Corey Seager bobble head tomorrow night and all kids will receive a Dodgers batting helmet on Sunday afternoon.

Wins:  Clayton Kershaw - 4
ERA:  Brandon McCarthy - 2.25
Strikeouts:  Clayton Kershaw - 39
Saves:  Kenley Jansen - 5
1982 Topps Appreciation:  When opening packs of 1982 Topps, I would always get excited when a Phillies card would appear but I remember also enjoying adding cards of Fernando Valenzuela to my collection.  Fernandomania took over the baseball world in 1981 and Topps capitalized on this by including four cards for Valenzuela in its 1982 Topps set.  In 1982, Valenzuela would go 19-13 with a 2.87 ERA, tying for third in the Cy Young voting (with Bruce Sutter) behind Steve Carlton and Steve Rogers.

Fast forward 12 years to the 1994 season, and there wasn't a lot to be excited about as a Phillies fan. Starting pitchers Curt Schilling, Tommy Greene and Ben Rivera were all injured and the starting pitching rotation was in shambles.  When I read news that June that the Phils had signed Valenzuela, who had been pitching in Mexico, I thought back to the days of Fernandomania.  Those days were long gone of course, and Valenzuela lasted eight games with the Phillies, before the player's strike prematurely ended the season.
Posted by Jim at 8:10 PM No comments: 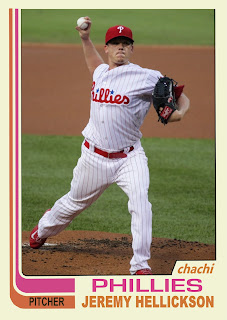 One Sentence Summary:  Jeremy Hellickson had another solid outing and Brock Stassi contributed a key RBI triple as the Phillies sunk the Marlins, 3-2.

What It Means:  The Phillies have a six-game win streak going and they'll open a three-game series late Friday night in Los Angeles.

What Happened:  Hellickson has now won four games.  He scattered seven hits in his six innings of work, working out of jams in both the fourth and fifth innings.  Stassi's first career triple scored Michael Saunders who masterfully avoided a home plate tag to score a crucial inusurance run. Hector Neris worked a quick ninth for his third save.

Featured Card:  Hellickson has been fantastic so far this season and his four wins ties him for the top spot in the league in that category with Wily Peralta and Clayton Kershaw.  This is his card from the Topps series one release.
Posted by Jim at 6:00 PM No comments:

Email ThisBlogThis!Share to TwitterShare to FacebookShare to Pinterest
Labels: 2017, Hellickson

One Sentence Summary:  Maikel Franco hit his second grand slam of the season and Vince Velasquez had an effective outing as the Phillies defeated the Marlins, 7-4.

What It Means:  The Phillies have a five-game win streak and they're a game over .500.

What Happened:  Franco's slam came in the third.  Freddy Galvis (3) added a solo home run in the sixth and Michael Saunders provided more insurance with his first home run of the season - a two-run shot in the eighth.  Velasquez earned the win, allowing three runs in 6 1/3 innings and striking out three.

Featured Card:  Franco has 20 RBIs so far in April, which is the most in the first month of the season for a Phillies player since Ryan Howard had 27 in April 2011.  (Source - Meghan Montemurro via Twitter.)  This is his newest card in my collection from the Topps Gypsy Queen set.

Transaction:  On Tuesday, Aaron Nola was placed on the 10-day disabled list with a lower back strain and infielder/outfielder Ty Kelly was added to the active roster.  Nick Pivetta is slated to take Nola's spot in the starting pitching rotation.  Here's hoping Nola's latest injury setback is only temporary.

The Phillies Room is actively seeking a decent photo of Kelly in a Phillies uniform for his Chachi card.
Posted by Jim at 1:00 PM No comments: 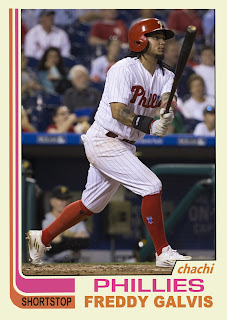 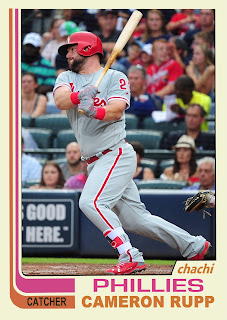 At the Ballpark:  The Phillies are giving away texting gloves tonight to fans 15 and over, and these same fans can presumably use their new gloves to try to keep their hands dry.  It's another dollar dog night tomorrow night.

Email ThisBlogThis!Share to TwitterShare to FacebookShare to Pinterest
Labels: 2017 Season

How Distributed:  The set has been available for sale at Citizens Bank Park since their home opener on April 7th.  Sets can be found at Phillies Newstands and at souvenir locations throughout the ballpark for $5.

Complete Standard Checklist:  The cards are unnumbered, but I've presented them below ordered by uniform number.

As of now, there's no one in the One and Done category as everyone in the set is still currently within the Phillies system.  This could change of course as the season progresses.  As of this writing, the following players in the set have yet to suit up for the Phillies in 2017:  Mariot, Quinn, Valentin and Venditte.  Venditte's position is listed as "SHP" for switch-handed pitcher, which is something I've never seen before on a baseball card.

(Update 4/14/18 - I've updated the One and Done category for Mariot, Rodriguez and Venditte as this set features their one and only Phillies baseball cards.)

The checklist creators did a fantastic job as the set includes ever player on the team's opening day roster.  Strangely enough, both Stassi and Knapp were assigned lower numbers a few days before the season started (#78 to #41 and #64 to #34, respectively) and Stassi's card reflects his new number while Knapp's does not.

The First Appearance designation is for players who have never before appeared within a Phillies team issued set. These players may have already appeared on other Phillies baseball cards.

Phillies Phestival Rarities:  The Phillies Phestival was held on May 11th and the Phillies created three new photo cards for the event in the style of this set. Zach Eflin's card is an actual action shot while cards of Mark Leiter, Jr. and Nick Pivetta are portraits.  All three cards are blank backed.

Additional Card:  In November 2017, I added a blank-backed Nick Williams card to my collection after winning* an autographed Williams bat at an ALS event.  The card came with the bat.  (*My wife would like to point out that she won the auction and the card is on loan from her.)
Resources:  Thanks again to fellow collectors Rick and Steve for information on the three rare cards available only from the Phillies Phestival.
Posted by Jim at 7:00 AM 2 comments:

One Sentence Summary:  Capped by back-to-back-to-back home runs from Cesar Hernandez, Aaron Altherr and Odubel Herrera in the eighth inning, the Phillies downed the Braves, 5-2.

What It Means:  The win completed the three-game sweep of the Braves and the Marlins come to town beginning Tuesday night.

What Happened:  The trio of home runs marked the first time for the three-in-a-row feat since Chase Utley, Ryan Howard and Pat Burrell did it on June 13, 2008.  Another highlight of this game was the fine pitching performance of Zach Eflin.  Making his second start of the season, Eflin pitched seven strong innings, allowing a run on three hits.

This card celebrates Hernandez's walk-off single from April 9th, and it's the second of four (so far) Topps Now card issued for the Phillies this season.  The card finish for this year's Topps Now cards is glossier and the back almost seems refractor-ish.
Posted by Jim at 9:00 PM No comments: 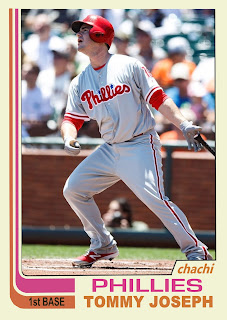 Joseph appears on card #174 within 2017 Topps series one along with four of his teammates, but he still hasn't received his own solo card within a Topps flagship release.