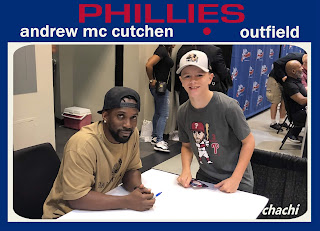 Doug and I had to skip the Valley Forge baseball card show last September (we couldn't remember if it was because of my work schedule, his baseball schedule or both) but we wanted to get to the September show this year.  After an unusual amount of Saturday morning traffic, we arrived to an absolutely packed convention hall.  There were a huge amount of autograph guests, including Phillies greats, Eagles greats and boxing legends Mike Tyson and Evander Holyfied.  The large crowd meant it was harder to navigate the tables, but Doug and I still managed to pick up quite a bit for our collections.

Having already secured autographs for most of the current and former Phillies players attending, we limited our autograph ticket purchases to just one for Andrew McCutchen.  Cutch looked good and he told us he felt good too.
Doug spent his allowance money on a giant stack of current Phillies cards, with his favorite additions being game-used jersey and patch cards for Aaron Nola, Rhys Hoskins and Bryce Harper.  He also found a nice Harper plaque to hang somewhere on his bedroom wall, although he's quickly running out of space.  I'm getting really close to finishing off my 1971 Topps set, so I was determined to cross a few more of those cards off my list.  Here's what I picked up as seen in the photo above:
Memory Lane

Looks like a great day of card shopping! I need to mark my calendar for these things--I completely forgot. And I wanted to get a Pete Rose autograph on either a Jim Bouton signed baseball (where I was going to pay for an inscription, "*@#! you, Shakespeare" on a panel right above Bouton--Pete's verbal attack on Bouton in 1970 after Ball Four came out) or on the Phillies Wall of Fame banner that I bought on eBay that apparently was sneaked out of CBP a couple years ago after his appearance was cancelled. I wonder whether he would have signed one or both--I would guess the answer is yes.

I'm pretty sure Pete would sign anything you put in front of him, as long as you were a paying customer!