After a long week at work (and some longer weeks ahead of me) it was nice to make the hour long drive to Valley Forge on Sunday for a baseball card show.  As has been my goal for the last few shows Doug and I have attended, my goal was to look for older Phillies cards and cross a few more 1971 Topps cards off my shrinking checklist.  Missions accomplished.

Here's what I added to my collection. 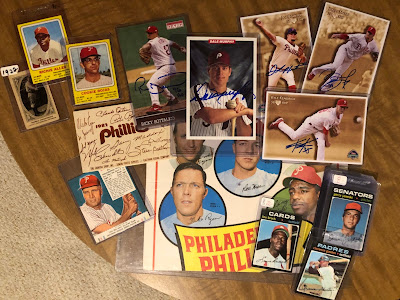 Doug did his usual free-style pickin', adding some cool autograph and relic cards of current Phillies, including cards of Harper, along with a few Mike Trout additions.

After the show, Doug and I stopped at the Majestic Clubhouse Store at Citizens Bank Park where we joined apparently thousands of other Phillies fans in purchasing their new Bryce Harper gear.  T-shirts were purchased for the family with Harper's new #3.  The store was packed with fans who weren't willing to wait until April for their new Harper t-shirts.  I'd say the line of customers waiting for custom Phillies jerseys was about 30 deep at 2pm on Sunday afternoon.