One Sentence Summary:  The Phillies offense went quiet against Cubs pitchers Ray Fontenot and Lee Smith as the Cubs prevailed, 3-1.

What It Means:  This was the game Mike Schmidt took the field pre-game wearing his disguise of a long wig and sunglasses.  Schmidt had made very unflattering comments about the Phillies' fanbase during the team's trip to Montreal.

What Happened:  The Phillies line-up had eight singles and went 1 for 12 with runners in scoring position.  Only Schmidt had multiple hits and the lone run came in the second on a Steve Jeltz ground-out back to the pitcher.  Ozzie Virgil broke for home as Fontenot threw to second for the force, and the Phillies' scoring was over for the day.

John Denny pitched well for the Phillies, lasting seven innings and giving up two runs (one earned) on five hits.  The Cubs line-up was once again littered with former Phillies, with Ryne Sandberg (2b), Gary Matthews (lf), Richie Hebner (3b) and Larry Bowa (ss).  Bob Dernier was on the disabled list and missed this series.

Featured Card:  Schmidt would pick it up in the second half, after he had attempted to clear the air with the Phillies' fans.  The first half MVPs for the club were Virgil, Glenn Wilson and Juan Samuel on the offensive side with Von Hayes also having a steady, but not great, year.  The Phillies received surprisingly consistent starting pitching in the first half from Kevin Gross, Denny, Steve Carlton and Jerry Koosman.  Don Carman and Kent Tekulve were the club's top relievers through June. 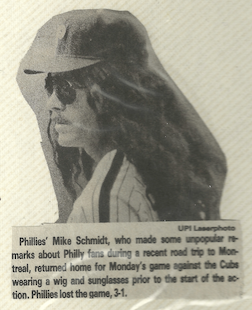