One Sentence Summary:  After a quiet game the day before, the Phillies offense exploded for 11 runs on 12 hits in this 11-2 walloping of Rick Sutcliffe and the Cubs.

What It Means:  Sutcliffe came back down to earth following his 1984 Cy Young Award winning performance.  Still, it's impressive he was able to battle through five innings after the Phillies had quickly scored four in the first.  He departed having allowed seven runs on eight hits, including a pair of home runs.

What Happened:  The home runs allowed came from Glenn Wilson in the first with three on (not surprising) and Derrel Thomas in the fifth with one on (surprising).  Greg Gross kept the scoring going after Sutcliffe departed, with an RBI-triple in the sixth off former teammate Warren Brusstar.  Steve Jeltz added a two-run triple in the eighth.  I'm curious as to why Jeltz was in the game at that point.  The official record shows he entered the game as a defensive replacement for Thomas in the sixth right after Thomas had hit his home run.  Was Jeltz really that much of a defensive upgrade over Thomas, or had Thomas perhaps hurt himself rounding the bases?

Featured Card:  Shane Rawley pitched his first complete game of the season, giving up two runs on eight hits.  As the beneficiary of the offensive outburst, Rawley evened his record at 6-6. 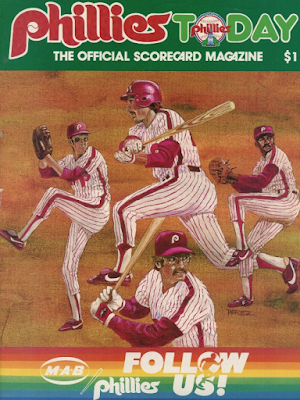