One Sentence Summary:  The unlikely duo of Tim Corcoran and Derrel Thomas had back-to-back pinch-hit singles in the ninth, sending the Phillies to a 3-2 win over the Expos.

What It Means:  Top fireman Jeff Reardon started the ninth for the Expos holding a slim 1-0 lead and was pulled for Randy St. Claire after allowing three singles, including Corcoran's game-tying hit.  Following the game, the Phillies headed home for seven games against the Cubs and Reds.

What Happened:  Jerry Koosman had another solid start, giving up two runs on a Mitch Webster solo home run in the first and a Tim Wallach sacrifice fly in the seventh.  He allowed only five hits.  Kent Tekulve pitched the final two scoreless innings for the Phillies and was the beneficiary of the win.

In the ninth, Glenn Wilson and Garry Maddox singled and Greg Gross was intentionally walked to load the bases for Steve Jeltz.  Corcoran pinch-hit for Jeltz, singling home the tying run.  Apparently after that Maddox tried to come home on a ball that got away from catcher Steve Nicosia, but was tagged out by St. Claire.  Gross moved to third on the play and came home with the eventual winning run on Thomas' hit.

Featured Card:  I'm fresh out of Thomas cards, mostly used in games in which he had a crucial error, so here's one of the other pinch-hitting hero, Corcoran. 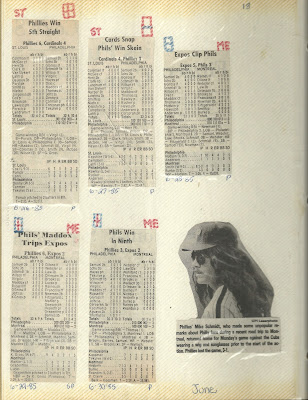