On March 13th, I posted the final spring training game summary post from the game played on Thursday afternoon, March 12th.  The Phillies won, 8-4 against the Rays in Port Charlotte.  Following that game, baseball went on indefinite hiatus as the world grappled with the COVID-19 pandemic.  A few weeks later, on March 26th, I posted on what would have been Opening Day with the mundane news that the Phillies had optioned six players to Lehigh Valley and the active roster (including non-roster invitees) stood at 52.

While live baseball was paused, I started going through my 1985 Phillies Scrapbook, posting game summary posts 35 years after the fact.  My plan is to keep doing those posts from 1985 through July 16th and that year's All-Star Game.  I'll then (hopefully) return to live baseball posts as the Phillies are set to open their 2020 season on either July 23rd or July 24th.  I've read reports that up to three exhibition games will be played prior to the start of the regular season.

Which brings us to today.  On Sunday, the Phillies released their initial Player Pool with 53 players, out of a potential 60, that will be eligible for play during the shortened 60-game season.  For the first time since March 26th, here's the updated math for the Camp Head Count, and it's a bit convoluted how we got here. 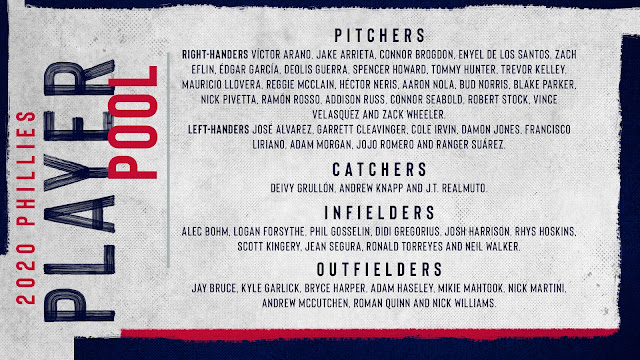 Notable omissions include Austin Davis (lhp) and Odubel Herrera (of).  The Phillies currently have 39 players on their 40-man roster, with four players left off this initial Player Pool list - Davis, Adonis Medina (rhp), Cristopher Sanchez (lhp) and Arquimedes Gamboa (inf).  Two veterans from the original non-roster invitee list who could eventually be added to the Player Pool are Bethancourt and Swarzak.

And they all have a really good shot at making the opening day roster.