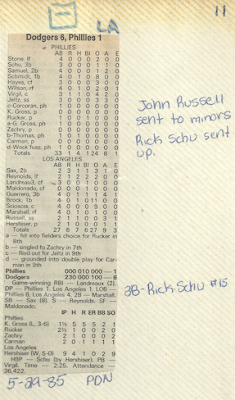 One Sentence Summary:  The new look Phillies fell to the Dodgers, managing only four hits off Orel Hershiser in this 6-1 loss.

What It Means:  In an otherwise forgettable season, the Phillies made perhaps their biggest move prior to the start of this West Coast swing by shifting Gold Glove third baseman Mike Schmidt to first base, and recalling prospect Rick Schu to man the hot corner.  The news was announced by manager John Felske during a postgame press conference following the Phillies' Memorial Day win over the Padres.  The struggling John Russell, the team's opening day first baseman, would be heading back to Portland and moved to left field.  There's a great article (linked here) from The Morning Call with Schmidt's reaction to the move.

From a scrapbook logistics standpoint, the late night game meant a Philadelphia Daily News was needed in order to clip out the boxscore.  My Dad most likely made daily trips to Wawa to make sure I had access to these West Coast game boxscores.

What Happened:  Kevin Gross got hammered in 1 1/3 innings, giving up five runs on five hits before yielding to the bullpen.  Also notable from this game is it was Pat Zachry's final career appearance.  The 10-year veteran and former Rookie of the Year pitched a scoreless fifth and sixth innings, striking out two.  The Phillies would designate him for assignment a week later when Jerry Koosman came off the disabled list.

Schu and Schmidt went a combined 1 for 7 with no errors.

Featured Card:  Through the first 42 games of the 1985 season, I've consciously tried to only post featured cards from 1985 or prior.  Let's jump in our time machines for this post and fast forward to 1986, when the Topps flagship card for Schmidt listed his position as "1B."  Fleer followed suit with the first base designation, but Donruss still listed Schmidt as a third baseman on his 1986 Donruss card.

Transaction:  As mentioned above, Russell was optioned to Portland and Schu was recalled.  Schu had worn #53 following his September call-up in the prior season.  Now a regular, he switched to #15, last worn by John Wockenfuss in 1984.  (Wockenfuss switched to #14 for the 1985 season.)

I've really grown to appreciate the 1986 Topps set in recent years... and a big part of that has to do with some fantastic action shot like that Schmidt.