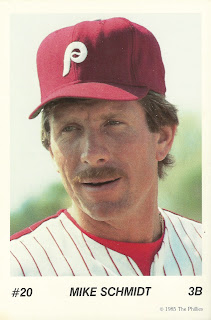 One Sentence Summary:  The Phillies treated a Memorial Day crowd to a come-from-behind victory, hanging on to beat the Padres, 10-9.

What It Means:  There's a few things to note from this game.  This was the last time I most likely watched live baseball as an 11-year-old for a week and a half, as the Phillies were about to embark on a west coast trip and a string of late night starts.  I doubt I watched much of this game either, as we would have been down at the shore at my grandparents beach house in Sea Isle for Memorial Day weekend.

This was also Mike Schmidt's last game as the team's regular third baseman in 1985, as the team was about to recall Rick Schu from the minors and he'd make the trip west with the club.  Schmidt would return to third more regularly in 1986.

What Happened:  On the day all fans received a free Phillies beach towel, the team scored early and often.  John Russell, about to earn a ticket to Portland, had a pinch-hit, three-run home run in the second.  Schmidt hit a three-run home run of his own in the fifth, and his 3 for 4 day also included a double.  Jeff Stone enjoyed a three-hit day.

Shane Rawley exited early having allowed four runs on six hits over just 1 1/3 innings.  The bullpen struggled, allowing the Padres to creep back into this game, but Kent Tekulve pitched the final two scoreless innings for the win.  With the score tied at nine in the eighth, Tim Corcoran's sacrifice fly scored Garry Maddox with the winning run.

Featured Card:  For one day at least, all was right in the Phillies' world.  Schmidt hit well and had a clean day in the field and the flight to Los Angeles was most likely cheerful.