One Sentence Summary:  John Denny out dueled Fernando Valenzuela and the Phillies took advantage of three Dodgers' errors in this 6-1 win.

What It Means:  This was Denny's second complete game in a row, but this time he got some run support from his offense.  He had lost his last complete game, 1-0, to the Padres a week earlier.

What Happened:  Ozzie Virgil continued to quietly pace the offense with two more RBIs - a sacrifice fly in the second and a solo home run in the ninth.  The Phillies took a 2-1 lead in the third when Jeff Stone reached on a fielder's choice, stole second and advanced to third on catcher Mike Scioscia's throwing error, and then scored when center fielder Ken Landreaux also misplayed the ball.

Denny allowed a solo home run to Mike Marshall in the second.  He closed out his complete game victory with three straight ground balls to short to retire the Dodgers in order in the ninth.

Featured Card:  Denny gets the card again here for his pitching efforts.  Once again, the boxscore is from the Philadelphia Daily News, as this game would have ended too late for inclusion in the Atlantic City Press.  My Dad's daily trips to Wawa to pick up the Daily News also meant a daily pack of baseball cards (or two or three) for me, and I'm reminded here that I hand collated our 1985 Topps and Fleer sets.  Our 1985 Donruss set was purchased in late June at that summer's Ocean City baseball card show.

I love the ad below from a 1985 Phillies program, noting that "Not only are baseball cards fun to collect but they are also a great investment." 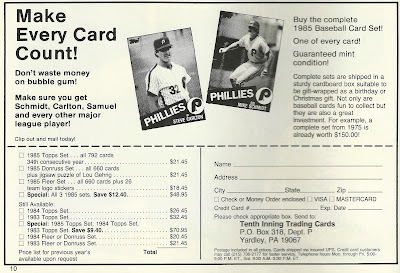