One Sentence Summary:  The Phillies rode a five-run fourth inning to an eventual 5-3 win over Bob Knepper and the Astros.

What It Means:  As discussed in yesterday's game summary post, my family would have completely missed watching these games as we were enjoying our vacation in Williamsburg, Virginia.  I remained focused on collecting boxscores for each Phillies game, dutifully clipping this one from The Virginia Pilot.

Gross earned the win, lasting 6 2/3 innings and giving up two runs on six hits.  He was pulled in the seventh after walking Jose Cruz with the bases loaded.  Don Carman continued his struggles, allowing another Astros run, before Kent Tekulve was called upon to record the game's final out and record his eighth save.

Featured Card:  Samuel had the big hit in the fourth, plating two runs.  He also stole his 29th base following his hit as a rattled Knepper probably wasn't paying much attention to him. 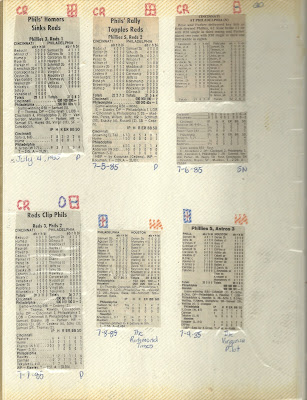