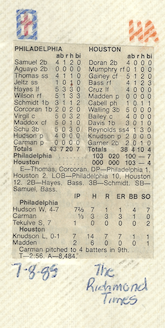 One Sentence Summary:  The Phillies unloaded for 20 hits inside the Astrodome, defeating the Astros, 7-4.

What It Means:  The source of this game's box score in my 1985 Phillies Scrapbook caught my interest as I indicate I clipped it from The Richmond Times.  Enlisting the help of my Mom, and asking her to go back through old family photo albums, we confirmed our family was on vacation in Williamsburg, Virginia while the Phillies were taking on the Astros in Houston.  My parents worked hard so that we could have one vacation a summer, and I have great memories of the few trips we took down to Virginia to visit Colonial Williamsburg and Busch Gardens.

What Happened:  This was more of a blow-out than the final score indicates, as the Phillies led 7-1 heading into the bottom of the ninth.  Don Carman had a rare rough outing, allowing three Astros runs to score before Kent Tekulve came on to lock down the save.  Charles Hudson had another effective start, allowing a run on seven hits in 7 2/3 innings while striking out seven.  Mark Knudson was the sacrificial pitching lamb for the Astros, giving up 14 hits and seven runs in his seven-inning outing.

Other than an RBI-triple from Mike Schmidt in the third, every other Phillies run came from a single or a force out.  Von Hayes, Glenn Wilson and Ozzie Virgil all had three hits, with Wilson also driving in three runs.

Featured Card:  I seem to remember Wilson usually doing well against the Astros, his home state team.  With the All-Star Game coming up, Wilson would be a late addition to the National League roster, replacing the injured Pedro Guerrero.