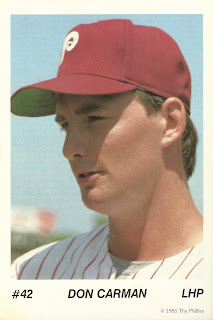 One Sentence Summary:  A four-run 7th inning, capped by a two-run home run from John Russell gave the Phillies a 5-2 come from behind win against the Reds.

What It Means:  The Phillies continued to play good baseball and they were now only seven games below an even .500.  However, the team would continue to take almost equal steps forward and backward throughout July, ultimately finishing the month nine games below .500 and 15 1/2 games behind the top spot in the division.

What Happened:  Trailing 2-1, the Phillies mounted a four-run rally following the 7th inning stretch.  Mike Schmidt started the seventh with a single off Reds' starter Tom Browning and came home to score and tie the game when Glenn Wilson doubled.  Ozzie Virgil reached on an error by third baseman Nick Esasky, with Wilson scoring in the process.  Russell followed that a few batters later with his two-run home run.  Schmidt had two hits in this game, including a solo home run in the first, and improved his average to .240.

Jerry Koosman pitched well (6 2/3 innings, two runs) but came away with a no decision.  Larry Andersen was the beneficiary of the win with Don Carman recording his third save after two scoreless innings of relief to close out the game.  Carman got pinch-hitter Pete Rose to fly out to right for the final out.

Featured Card:  I feel Carman's performance this season has been often overlooked, so I'll give him the card here.  Following this outing, Carman's ERA was down to 1.76 for the season and he was clearly one of manager John Felske's most reliable relievers. 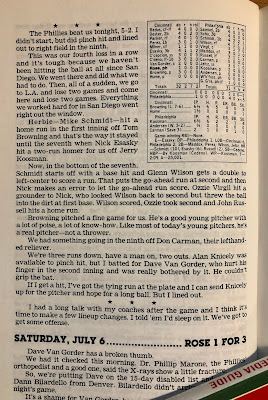