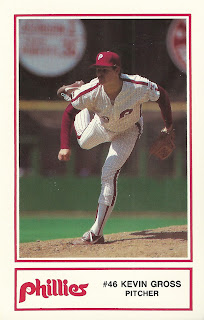 One Sentence Summary:  Kevin Gross limited the Reds to three hits in his complete game, as the Phillies won on Independence Day, 3-1.

What It Means:  The Phils were playing pretty good baseball, and at almost the mid-point of the season they were only eight games under .500.  Unfortunately, they continued to look up at the much better Mets, Cubs, Expos and Cardinals in the N.L. East.

What Happened:  Gross evened his record at 7-7 and lowered his ERA below three at 2.99 with this performance.  He allowed one run on three hits while striking out four.  The Phillies scored quickly off Reds starter Mario Soto with two solo home runs in the first from Juan Samuel and Von Hayes.  Ozzie Virgil completed the scoring with another solo home run off Soto in the sixth.

Pete Rose went 0 for 3, and recounts the game in the summary below from his Countdown to Cobb book.

Featured Card:  After some inconsistent starts, Gross was emerging as one of the stronger pitchers in the Phillies starting rotation.  This was his second complete game in a row and he was 2-0 with a 1.44 ERA over his last three starts.  In the book excerpt below, after Rose recounts his visit to the racetrack for a little innocent betting (ahem), the Reds manager lumps Gross in the same category with the Dodgers' Orel Hershiser and Fernando Valenzuela. 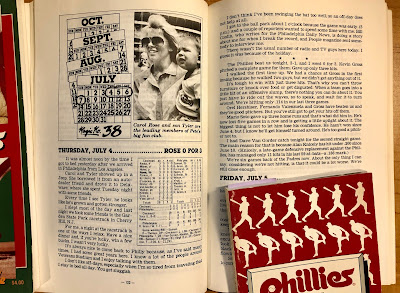