One Sentence Summary:  The Phillies rode a five-run fourth inning, including home runs from Rhys Hoskins and Jose Pirela, to a 5-4 win over the Braves.

What It Means:  With 12 games remaining, the Phillies still have a faint heartbeat and they're tied with the Mets at four games behind the Cubs and Brewers.

What Happened:  Vince Velasquez recovered from a rough bottom of the first to battle through five innings and allow two runs while striking out eight.  Hector Neris allowed a ninth inning home run to Adam Duvall, but escaped the ninth to record his 27th save.  The offense did all their work in the fourth inning against Dallas Keuchel, with the following progression - Bryce Harper infield single/probably more accurately an error by Josh Donaldson, Hoskins home run (29), Scott Kingery infield single, Sean Rodriguez single, Cesar Hernandez ground out to score Kingery, Pirela home run (1). 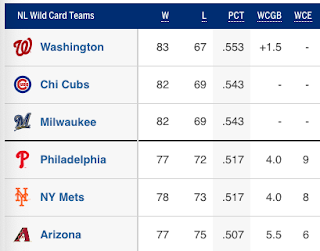 Featured Card:  Hoskins now has 29 home runs and 83 RBIs, but his average is still a much too low .239.  The Phillies will need Hoskins and the rest of the Phillies offense to go on a complete tear if there's any hope of playing October baseball.  It's getting late very quickly at this point.

Transactions:  Corey Dickerson was placed on the 60-day injured list with a broken left foot, ending his season and possibly his Phillies tenure.  In 34 games with the Phillies, Dickerson hit .293 with 8 home runs and 34 RBIs.  Edubray Ramos was activated from the 60-day IL, and if he enters a game it will be his first appearance since July 15th.
Posted by Jim at 7:00 PM

Email ThisBlogThis!Share to TwitterShare to FacebookShare to Pinterest
Labels: 2019, Hoskins