This a crossover post from my other blog, chronicling each card in the wonderful 1956 Topps set. Today's post features former Phillies pitcher Roger Craig.  Please click on over there for all of the posts to date, including a look at all the Phillies Alumni featured in the set.

A few decades before he was a successful manager for the Giants, Roger Craig pitched in parts of 12 seasons, experiencing the move of the Dodgers to the West Coast and suffering through the futility of the first fews years of the Mets' existence.  Craig went to six World Series (four as a player), winning rings with the 1955 Brooklyn Dodgers, the 1959 Los Angeles Dodgers, the 1964 Cardinals and as a coach with the 1984 Tigers.  Spending equal time as a starter and a reliever, Craig went 74-98 in 368 career appearances and owned a 3.83 career ERA.  He lost 46 games over two seasons with the expansion Mets. 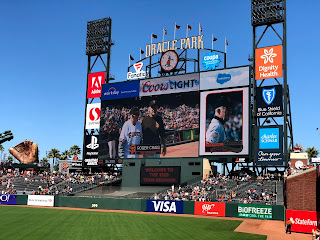 Following his playing days, Craig taught his signature pitch, the split-finger fastball, to several pitchers including Jack Morris, Mike Scott and Milt Wilcox.  He served as a pitching coach for the Padres (1969-1972), Astros (1974-1975), Padres again (1976-1977) and Tigers (1980-1984).  In 1985, he was named manager of the Giants and he led the 1989 Giants to their first World Series appearance in 27 years.  Craig's leadership and unique rallying cry, "Humm Baby" weren't enough to defeat the Athletics in the 1989 series interrupted by 10 days as a result of the devastating Loma Prieta earthquake.

My family visited San Francisco for the Phillies series in early August, and the Giants celebrated the 30th anniversary of the 1989 team with a pre-game ceremony.  Craig, now 89, was on hand to celebrate with his former team and he took the field to a standing ovation with current Giants manager Bruce Bochy.

The Card
This is Craig's rookie card and what looked to me initially to be a #10 on the back of his jersey is actually #40.  Craig wore that number for the first four seasons of his Dodgers career before switching to #38 for the 1959 season.  His birth year is off a year on the back of his card, as he was actually born in 1930. 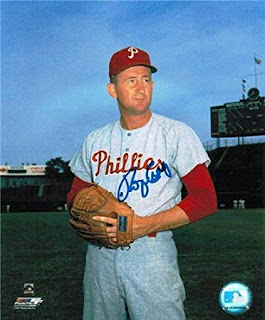 The final panel on the back of the card celebrates Craig's performance in Game 5 of the 1955 World Series.  With the series tied at two, manager Walter Alston (#8) handed the ball to Craig.  I'm fairly certain he wasn't carried off the field, but Craig pitched six strong innings, allowing four hits including a solo home run from Bob Cerv (#288) in the seventh that chased him from the game.  Reliever Clem Labine (#295) held down the Yankees for the final three innings, giving the Dodgers a 3-2 advantage in the Series they'd ultimately win in seven games.

1956 Season
In his first full season with the Dodgers, Craig appeared in 35 games (32 starts) pitching to a 12-11 record and a 3.71 ERA.  He led all pitchers with a 1.000 fielding percentage, not committing an error in 32 chances.  Craig was the second top starting pitcher in the Dodgers rotation in 1956, following Newcombe and coming in ahead of both Sal Maglie and Carl Erskine (#233).

Phillies Career
On April 11, 1966, Craig was released by the Cincinnati Reds at the end of spring training, signing with the Phillies that very same day.  Craig made his first appearance for the Phillies on opening day against the Cardinals, coming on to relieve Chris Short in the 10th after Short had pitched 9 2/3 innings.  Craig pitched 1 1/3 scoreless innings and was the recipient of the win when John Herrnstein singled home Dick Allen with the eventual winning run in the 12th.

Used solely as a reliever, Craig appeared in 14 games for the Phillies, going 2-1 with a 5.56 ERA.  The 36-year-old Craig was released by the club on July 23rd, ending his big league career.  Craig received a Phillies card in the 1966 Topps set, but the photo used is the exact same photo used for Craig's 1962 Topps card, when he was with the Mets.  Craig signed reprinted versions of his 1966 Topps card for inclusion in the 2015 Topps Heritage set.

Amazing....I went to that Sunday night 1989 reunion game too, bought a scalped ticket that was right in the midst of the Phillies group in the first deck down the RF line, we were probably within a few rows of each other! Met some nice folks, they were all very complimentary of the park and had enjoyed their visit to the city and all 4 games of the series.

Either way, he's always been very generous in signing autographs.

Mr. Haverkamp - That's incredible! We really loved that ballpark and the surrounding area.

Steve - I always felt all managers looked like they were at least 80 or 90 years old, and now I'm to the point where I'm older than most of them!