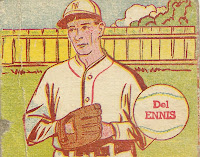 Back in October, I picked up the card seen here at the Valley Forge Baseball Card Show.  I was flipping through a binder of vintage oddball Phillies cards - quite possibly the best kid of binder there is - when I stumbled upon this "Del Ennis" card.

I made him what I thought was a reasonable offer for the card, and he accepted.  I knew there was no way the card was actually meant to represent Ennis, as Ennis had never played for either the New York Yankees or Giants during his career.  And the player featured on the card clearly was wearing a cap with the familiar interlocking "N" and "Y". 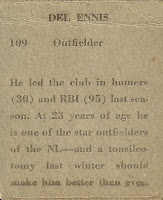 When I got home, I sorted my new goodies and settled down with the Standard Catalog to determine exactly what it was I had just added to my collection.  Here's what I found out:

- M.P. & Co. stands for Michael Pressner and Company, which was a New York City-based "novelty and carnival supply firm."

- They originally released a set of 24 cards in 1943, featuring "crude color drawings that have little resemblance to the player named."  The Standard Catalog also points out that the original set was one of the few released during World War II.

- Thanks to Jefferson Burdick, the original set has been designated R302-1, with the second set, released in 1949, designated R302-2.  Burdick used the "R" designation for candy and gum cards issued beginning in 1930. 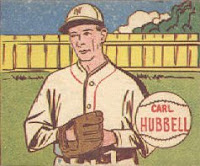 - The card I now have in my collection is from this second set, issued six years after the original.  The set's manufacturer took the very unusual step of updating the player selection for the re-release, but neglecting to update any of the photos used!  So the Ennis card featured here is really just the Carl Hubbell card from the original set (image lifted from the Old Cardboard gallery, found here) with Ennis' name added.

And there you have it.  I'm not sure if this card technically belongs in a Phillies collection, but since it features one my Dad's all-time favorite players, it now has a comfortable home.  Without a doubt, it's now the strangest Del Ennis baseball cards in my collection.
Posted by Jim at 8:50 AM

Email ThisBlogThis!Share to TwitterShare to FacebookShare to Pinterest
Labels: 1949, Ennis

A card like this is a good reason why I should continue to go to baseball card shows. I love finding things I've never seen before.

I mentioned this on some other blog as well that featured an MP & Co. card--the card looks like it could be a Japanese baseball card from the same era. See here:

Or just do a Google image search for "Japanese baseball card" and you can see a number of other examples.