One Sentence Summary:  The Phillies slunk into the All-Star break having lost five in a row, including this 12-3 loss to the Braves.

What It Means:  This should do it for my look back at the Phillies' 1985 season.  Unless pandemic conditions worsen, or something unforeseen happens in the coming weeks, the 2020 Phillies are set to open their abbreviated season on July 24th against the Marlins.  They'll play three exhibition games before that against the Nationals, Orioles and Yankees beginning July 18th.

I'm preparing a post summarizing the 1985 All-Star Game, and then I'll travel 35 years back to the future in a return to covering live baseball.  The 1985 Phillies were an incredibly flawed team, but I've genuinely enjoyed going back and looking at their first 86 games.  I started this exercise as a daily diversion in April once the 2020 regular season was postponed, and as a 20 to 30 minute break each day, allowing me to hide from the current sorry state of affairs.

What Happened:  Manager John Felske must not have believed in position players pitching, as Kevin Gross (6 innings, 8 runs) and Dave Rucker (2 innings, 4 runs) shouldered the entire load against the Braves.  The Phillies offense went down relatively quietly.  Von Hayes singled home a run in the third.  Tim Corcoran drove in a pair of runs without a hit, grounding out in the second to score  Glenn Wilson and hitting a sacrifice fly in the sixth.  Mike Schmidt went 1 for 4 and ended the first half with his average up to .242.

Following the game, Wilson and Ozzie Virgil headed to Minneapolis for the 56th mid-summer classic.

Featured Card:  Schmidt and I bid a fond farewell to the 1985 season, and we're hopeful for a short and successful 2020 campaign for the Phils! 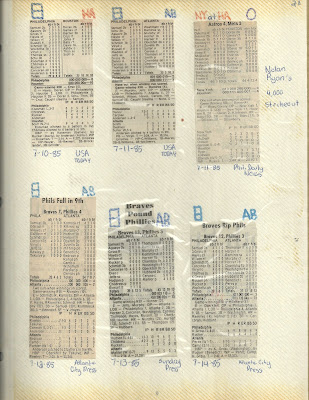