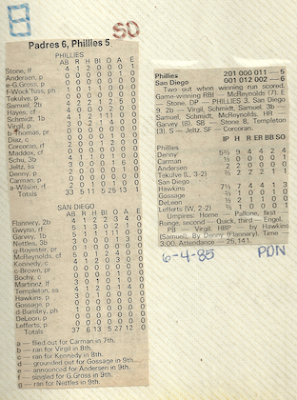 One Sentence Summary:  The Phillies battled back in the late innings to take the lead, only to watch the Padres walk off with a win in the ninth on a Kevin McReynolds triple.

What It Means:  It's probably best this game would have been mostly ignored by Phillies fans on the East Coast not willing to stay up late on a Tuesday night to watch their bottom-dwelling team take on the first place Padres.

Given the time of game was exactly three hours, the winning run would have scored at a little past 1am.

What Happened:  The Phillies were trailing 4-3 heading into the eighth inning.  John Denny had exited after 5 2/3 innings, having allowed four runs on nine hits.  A two-run single from Tim Flannery in the sixth gave the Padres the lead and chased Denny from the game.  The Phillies had scored their runs on an RBI-triple from Juan Samuel and an RBI-double from Ozzie Virgil in the first.  Tim Corcoran, getting his first start of the season in right field, added a sacrifice fly in the third.

The Phillies tied the game in the eighth when Juan Samuel started the inning with a double off Padres starter Andy Hawkins.  Rich Gossage relieved Hawkins and surrendered an RBI-triple to Mike Schmidt.  In the ninth, Rick Schu and Glenn Wilson singled to give the Phillies runners at first and third.  Pinch-hitter John Wockenfuss came through with a clutch single off reliever Craig Lefferts to give the Phils the slim 5-4 lead.

Kent Tekulve came on to attempt to close out the game in the ninth, but he allowed a single to Tony Gwynn and walked Graig Nettles.  With two outs, McReynolds hit his game winning triple, handing the Phillies a loss and Tekulve's second blown save with the club.

Featured Card:  Wockenfuss was nearing the end of his 12-year big league career at this point, and the 36-year-old was being used primarily as a bench bat.  He had only six hits in 1985, with this being by far his biggest one.