I'll admit I've been spending way too much time over the past few days hitting refresh on Twitter and MLB Trade Rumors, hoping for any Phillies scoop or consummated deals.  I realize this exercise is futile.  All the national (and local) media can report at this point is something along the lines of:

Sources telling me the Phillies are listening to all potential suitors right now and they're ready to make a deal for the right pieces.

No one knows anything except the Phillies front office and these "sources" might as well be me. 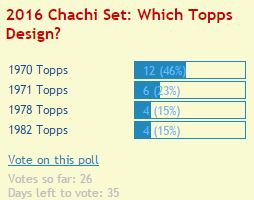 I'm going to leave this poll up until Topps goes live with its first look at its 2016 flagship set.  At that point, I'll take the poll down and officially announce the 2016 Chachi set design.  So please refresh your memories with this post and happy voting!
Posted by Jim at 4:00 PM

Email ThisBlogThis!Share to TwitterShare to FacebookShare to Pinterest
Labels: 1970, Fryman