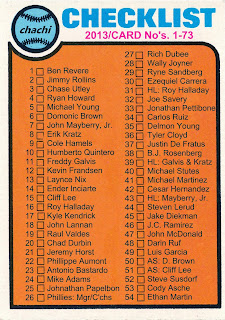 I'm posting this year's Chachi set checklist earlier than usual, which is a definite sign of my wanting to put the 2013 season in the past and keep the focus on the future.  This year's set came in with four more cards than in the prior year, mainly due to the number of different relief pitchers used during 2013 in an effort to find someone who could effectively and consistently record a few outs.

Work has already begun in earnest on the 2014 Chachi set at the Chachi World Headquarters.  I'm looking forward to spending a season using the 1988 Topps design to create my custom Phillies cards.  There are no postseason cards in the 1988 Topps set, so I'm excited for the challenge of creating a template for the 2014 postseason cards I'll be needing in October when the Phillies make their triumphant return.

Pitchers and catchers will be reporting before you know it.
Posted by Jim at 7:00 AM

I'd like to see a Phillie break a record next year. I absolutely love the Record Breaker cards from 88 Topps. I am not familiar with the state of the Phils roster, but are there any potential position openings for All Star rookies? The Rookie Cups in 88 are the best ever.

Looks good, but what about the back of the card with cards 55-73 listed???

We'll definitely see some the 1988 Record Breakers cards in the 2014 set. I've already started working with the design so that I could tweak the text at the top to read "Season Highlight."

Steve - I stopped doing the backs of the cards following the 2008 season. Way too time consuming and not enough fun. Maybe when I'm old and gray (and rich and famous) I'll go back and create the backs to the 2009-?? sets.