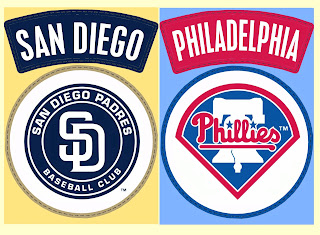 At the Ballpark:  It's bound to be a sparsely populated three-game series against the Padres, but at least tonight is Bark in the Park night.  This is the first ever event held at the ballpark in which pet owners are permitted to bring their dogs with them to the game.

Please don't tell Chachi this is happening.  I can't make it to the game tonight, and I'll try to make it up to him next year.

*Michael Young, now with the Dodgers, is tied for the overall team lead (.276) among players with enough qualifying plate appearances.

1973 Topps Flashback:  Derrel Thomas and Dave Roberts were teammates on the Padres from 1972 to 1974, wearing the brown and mustard yellow that has since been replaced with a very boring navy blue.  Roberts stuck around with the Padres through the 1978 season before he was traded to the Rangers along with Phillies Room favorite Oscar Gamble.

The Phillies acquired Roberts in March 1982 from the Astros, but injuries limited him to just 28 games with the club.  He stuck around long enough to appear with the Phillies in the 1983 Donruss and Topps sets, before the team released him in May 1983.

To be honest, I'm not sure how Thomas came to be with the Phillies.  His Baseball Reference page says he was granted free agency by the Angels in November 1984 and then the Phillies purchased him from Miami (Florida State) in May 1985.  Was this some sort of independent league back in the day?  In any event, Thomas appeared in 63 games for the 1985 Phillies, hitting just .207 but seeing time at shortstop, left field, center field, second base and third base.  He even caught two innings in a game back on August 21, 1985, hitting a three-run home run in the process.
Posted by Jim at 6:05 PM