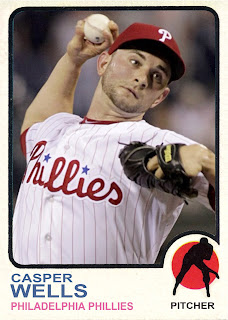 One Sentence Summary:  The Phillies managed to tie up this game in the eighth, only to eventually lose ten innings later in the 18th after reliever Casper Wells couldn't stop the Diamondbacks.

What It Means:  It means I'm tired.  I decided to stay up and watch this entire game, finally turning off the TV around 2:30 Sunday morning.

What Went Wrong:  This is one of those historical wacky games that merits a bullet-pointed list in lieu of the standard sentence and paragraph format:
Featured Cards:  The Wells card featured here is an extremely rare, super short-printed Chachi card available only as inserts in random box tops of the 2013 Chachi set.  Wells' more readily available Chachi card was published early this morning as the game was drawing to a close.

Former Phillie farmhand Tuffy Gosewisch spent 7 1/2 years toiling in the team's minor league system before being sold "for no compensation" to the Toronto Blue Jays last July.  He finally made it to the big leagues with the Diamondbacks earlier this month.  Gosewisch made two outs in the 18th inning, off non-pitchers Wells and McDonald.  He's got to be the first person in history to accomplish that feat.

Happy to hear you stayed up late watching it...I was hoping that MLB network would do a cut-in once the non-pitchers took the mound, and they did. Thought Casper threw pretty hard and fairly accurately. Would have loved to see Tuffy make 2 of the 3 outs in the inning!

I stayed up until the end too (although I only monitored the score on the MLB At-Bat app until the 8th when they tied it, at which point I switched it on). This was the type of game that is the reason I watch baseball--unexpectedly on a random Saturday night with a weak team, the Phillies play their longest game ever. I was trying to convince some friends that we should drive down there around the 13th, but no one was responding to my texts except for a friend in California and a cousin who was firmly settled in at a bar and wasn't going anywhere.

It's hard to get too down on Casper Wells. He could have kept his mouth shut when Ryne asked who could pitch, but he gave it the old college try and almost had a 1-2-3 inning.

The only bummer for me was that my extended family had our annual R-Phils trip planned and had had tickets for Sunday's game since April. For several days we thought we'd be sitting in excellent seats to watch Doc pitch, but it wasn't to be. Ah well, easy come, easy go.