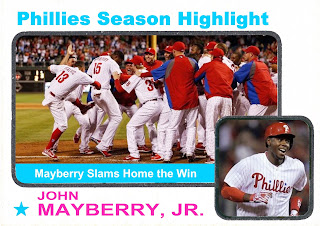 One Sentence Summary:  John Mayberry, Jr. hit a home run in the 10th inning to re-tie the game and followed with a dramatic grand slam in the 11th inning to win the game, 7-3.

What It Means:  Excitement!  Electricity!  From your 2013 Philadelphia Phillies!  Following this win, the Phils were once again a game under .500.  A win this afternoon against the Marlins could get them to break-even for the first time since April 14th.  (SPOILER ALERT - They got there.)

What Went Right:  Mayberry's big night was made possible when the Phillies tied up the score in the seventh on doubles from Ryan Howard, Delmon Young and Erik Kratz.  Antonio Bastardo allowed a Marlins run in the top of the 10th, but Mayberry's solo shot made it a 3-3 tie.  In the 11th, Marlins pitcher Edgar Olmos allowed Domonic Brown to reach on his error.  He then walked Freddy Galvis and Kratz to set the stage for Mayberry and his game-ending slam.

Featured Card:  If Galvis and Kratz earned a highlight card for their walk-off heroics back on May 19th, then certainly Mayberry is deserving as well.  The Philadelphia Inquirer's Matt Gelb was kind enough to put together this report, showing the ten Phillies players to have hit walk-off grand slams since 1958.  Mayberry's home run put him in the same company as several Phillies notables.

Field Report:  And we were there!  The first six innings of the game were extremely boring, but the late fireworks more than made up for that.  As an added bonus, we added two Carlos Ruiz bobble heads to The Phillies Room collection.  One bobble head now lives on the official bobble head shelf, and the other has found its way into my son Doug's room, representing the start of his bobble head collection.  My 2013 record improved to 2-3.
Posted by Jim at 4:00 PM

So, I guess you were ok not being in Section 36 after all?

Edgar (James?) Olmos did not exactly stand and deliver for the Marlins.

I love the shelf too! I don't have my own shelf, but my son's preschool is over for the year and so he has been "exploring" the basement the past few days and found my stash of boxed bobbleheads. He does have a shelf already with about 3 of them (plus a signed photocard "To Sammy, Best Wishes, Sammy--Juan Samuel"). Now he has quite a few more bobbleheads on his shelf. Although not quite as many after my middle daughter saw them and insisted that she get a couple of them on her shelf too. So now my bobbleheads are on display after all.

The whole thing made me think of the scene in The 40-Year Old Virgin when Steve Carrell's character had all those boxed toys, and his friend started opening them, saying "Toys want to be free" or something like that. (And it sort of made me embarrassed that I still had them all boxed. I'm glad my kids never saw that movie. And not just for the language in it.)