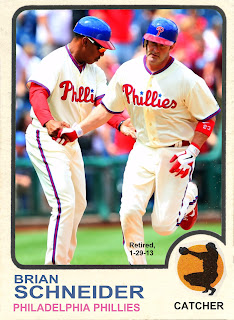 In a little over a week, the baseball complex at Bright House Field in Clearwater will come alive with players stretching, playing catch, fielding ground balls and taking batting practice.  To say that I'm excited about this would be a ginormous understatement.

Before camp officially opens, I wanted to take a look back at the moves made (so far) by the Phillies this offseason.  This post also presents back-up catcher Brian Schneider's final Chachi card, as the 13-year veteran announced his retirement last week.

Schneider was a serviceable back-up during his three years with the Phillies, hitting .212 over 122 games.  He'll pass the back-up catcher baton to Humbero Quintero (initially) and Erik Kratz (eventually).