One Sentence Summary:  The Phillies lost 7-5 to the Red Sox for the following three reasons - Joe Blanton allowed four home runs, the offense stranded 11 runners on base and they batted into three double plays.

What It Means:  It means the team's modest six-game winning streak is over.  The Phils could have gained ground in the N.L. East as every other team in the division lost on Saturday.

What Went Wrong:  Despite banging out 15 hits, the offense couldn't execute when it counted the most.  The three double plays definitely hurt, but two other plays in particular stand out in my mind.  In the bottom of the seventh, the Phils had runners on first and second when Carlos Ruiz launched what could have been a two-run double into right-center.  Red Sox center fielder Ryan Sweeney made an unbelievable diving catch, ending the inning and deflating the ballpark.  Then, in the bottom of the eighth, the Phillies loaded the bases with two outs.  Shane Victorino, following a four-pitch walk to John Mayberry, Jr., popped up weakly to short on the first ball he saw.  Not good.

Three-hit nights from Mayberry, Victorino and Hector Luna were wasted, as was the two-run home run from Freddy Galvis in the fourth. 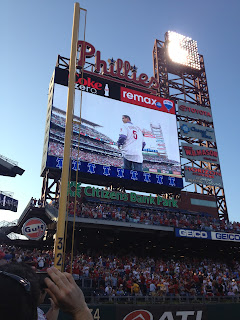 Featured Card:  Prior to the game, Pat Burrell threw out the first pitch (to Chase Utley) and officially retired as a Phillie.  There was a nice pre-game ceremony and a touching reminder of just how much former coach John Vukovich meant to Burrell and the Phillies franchise in general.

The card featured here was one of the cards that was a must have in the summer of '99 for Phillies fans and rookie card collectors.  Burrell had a ton of cards released that year, but I recall this card, along with his Fleer Mystique card, and his Bowman Chrome card as being in the highest demand for some reason.

Field Report:  I was there for the second night in a row, as a guest of one of my friends with a partial season ticket plan in Section 138.  No offense to my friend, but I enjoyed the Friday night game more than this one.  The loss dropped my personal attendance record to 2-4 this year.
Posted by Jim at 10:00 PM

Email ThisBlogThis!Share to TwitterShare to FacebookShare to Pinterest
Labels: 1999, Burrell

What a great game!