One Sentence Summary:  The squad split again, tying in Clearwater and losing in Lakeland.

What It Means:  We're entering the final full week of exhibition play.  The games start counting a week from Thursday.

What Went Wrong:  The Phils took a 2-2 tie against the Tigers into the seventh when Tigers prospect Tyler Collins broke the game open with a three-run home run off reliever Joe Savery.

In Clearwater, Roy Halladay pitched into the seventh inning, allowing two runs on seven hits while striking out nine.  Jim Thome made his 2012 Grapefruit League debut at first base and he knocked in a pair of runs with an RBI-double.

Featured Card:  The big news yesterday was that Chase Utley would be available prior to the game to address the media regarding his chronic knee problems.  Speculation swirled that the All-Star second baseman may even be announcing his retirement.  Fortunately, the informal gathering was no more than a Q&A session with the media and there were no major announcements.  Unfortunately, Utley set no timetable for his return.  Although he feels confident that he'll play in 2012, you have to wonder if he'll be physically capable of going all-out like he did in the photo on his Topps Opening Day card. 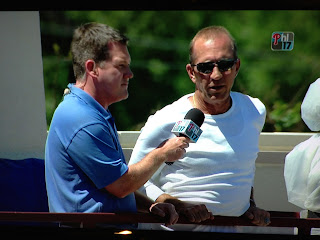 Other Stuff:  It was cool to watch this game on TV yesterday and catch an interview with my all-time favorite Phillie, Bob Dernier.  Dernier was in town to provide a little instruction to the Phillies minor leaguers and to play golf with former teammate and current Phillies announcer, Gary Matthews.
Posted by Jim at 8:00 AM

You used "Chase Utley" and "Opening Day" in the same sentence.