The Phillies' off-season news so far has centered around whether or not the team would be willing to re-sign right fielder Jayson Werth.  There have been a few minor league signings, reliever Jose Contreras was re-signed and Juan Samuel was named the team's new third base coach.  Other than that, it's been fairly quiet so far.  Barring some out of nowhere blockbuster trade, I expect the Phillies to continue to tinker with their roster, but I don't expect anything major.
Back in November 1991, the Phillies had two major objectives - re-sign closer Mitch Williams and sign All-Star outfielder Bobby Bonilla.  I kept close watch on the Bonilla sweepstakes in November 1991, as I counted 13 pages in my scrapbook detailing the negotiations with Bonilla, his trip to Philadelphia, his visit to Lenny Dykstra's home, and his eventual signing with the New York Mets for $29 million over five years.  I, along with most everyone else, thought Bonilla would be the answer to all the Phillies' problems and that his signing would translate into an instant play-off berth for the team in 1992.  I was extremely disappointed when the Phils failed to land the slugger. 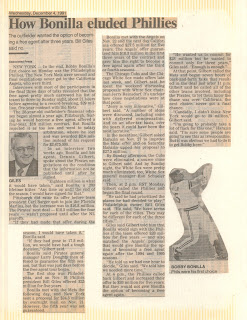 As we now know, the signing was a bust and Bonilla never recaptured the success he had with the Pirates' teams of the late '80s and early '90s.  This article recounts how Bonilla actually wore earplugs to the plate in late May 1992, in order to drown out the ubiquitous boo's that greeted him inside Shea Stadium.  Bonilla was traded to the Orioles part-way through the 1995 season, and he bounced around with the Marlins, Dodgers, back to the Mets, Braves and Cardinals before calling it a career following the 2001 season.
In retrospect, not signing Bonilla was one of the best moves the Phillies made in the early '90s.  With Bonilla officially a Met, the Phillies turned their attention to other free agents, eventually signing Mariano Duncan and re-signing Wild Thing.  They freed up enough money to cobble together several role players without homes following the '92 season, and an unexpected trip to the play-offs resulted in 1993.
Posted by Jim at 7:00 PM 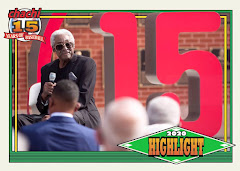