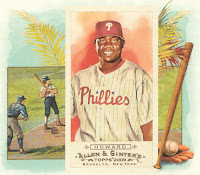 Christopher, The Phillies Room's first ever field reporter, checks in today from Clearwater:
Day 2 of my Spring Training 2010 trip started off a lot better than Day 1 - I was already in Florida and had no travel drama. As for the game, it was a rematch between the teams in the 2008 World Series.
Joe Blanton and Matt Garza were both sharp, but Garza gave up two home runs to Ryan Howard and one to Shane Victorino. Some shoddy ninth inning defense by John Mayberry, Jr. and Chase Utley allowed the Rays to tie the game, but a bottom-of-the-ninth rally for the second day in a row allowed the Phils to pull out a 4-3 win. A win and the fantastic weather made the ballpark fare and the Bright House Field atmosphere great.
Tomorrow will include a road trip to the happiest place on earth, Disney World, to watch the Phils play the Braves at the Wide World of Sports. It looks like we'll be seeing J.A. Happ pitch in Orlando, so here's to hoping for a great start from him and a good end to the spring for the Phils.
So tomorrow while I'm attending work meetings, holding conference calls and filling out paperwork, Christopher will be attending a Phillies' Spring Training game at Disney World. White hot jealousy does not begin to describe the emotion I'm feeling. (Thanks again Christopher and please tell Mickey we hope to see him again real soon!)
Posted by Jim at 9:34 PM

Email ThisBlogThis!Share to TwitterShare to FacebookShare to Pinterest
Labels: 2009, Howard