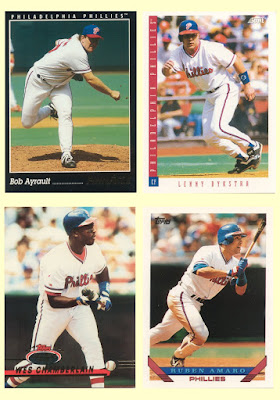 1993 Pinnacle #229 Bob Ayrault
1993 Score #30 Lenny Dykstra
1993 Stadium Club #34 Wes Chamberlain
1993 Topps #43 Ruben Amaro
Having hosted one successful Nostalgia Day in June 1991, the Phillies decided to take another trip back in time in June 1992. For this turn back the clock installment, the Phillies and Cubs wore uniforms from their 1948 seasons. The blue helmets and lack of pinstripes on the home uniforms had not been seen in these parts since just after World War II. The blue helmets would return (briefly) in 1994 and the Phillies would debut an alternate home uniform, based on their 1948 uniforms, for home day games starting in 2008.
Unfortunately, the Phils' retro-uniform record fell to 0-2 as pitcher Kyle Abbott lost for the 8th time. By 1992, I was using clippings from all over the place - the box score and daily standings are from Baseball Weekly, the game summary at the top is from The Phillies Report, the stats are from the Philadelphia Daily News and the other stuff is taken from the Atlantic City Press. 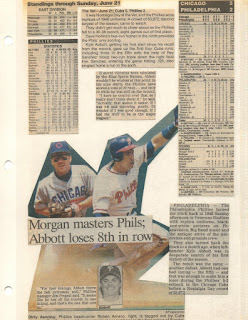