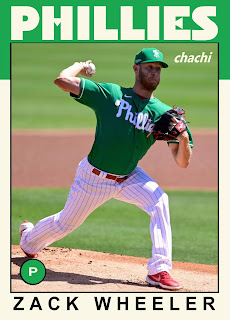 One Sentence Summary:  Zack Wheeler and four Phillies relievers combined to shut out the Tigers in this 2-0 St. Patrick's Day win.

What It Means:  Having missed last year's St. Patrick's Day game due to the spreading pandemic, it was nice to see the Phillies once again don their green uniforms in celebration of the day.  See below for additional green posts throughout the history of this blog.

What Happened:  Wheeler threw five effortless shutout innings, striking out four.  The three pitchers currently in contention to be the team's closer then followed with three scoreless innings of their own - Hector Neris, Jose Alvarado and Archie Bradley.  David Hale completed the game, earning the save.
The Phillies scored both their runs in the fourth.  Odubel Herrera hit his third spring home run, and later Ronald Torreyes doubled home Darick Hall.

Featured Card:  I made a rare green parallel card for Wheeler to celebrate his outing and the holiday.