One Sentence Summary:  Carlos Santana and Maikel Franco led the way with home runs in this 10-6 win over the Braves.

What It Means:  The Phillies wore green in their annual St. Patrick's Day game.

What Happened:  Santana (1) and Franco (3) both homered, and a three-run fourth inning saw RBI doubles from Ryan Flaherty, Mitch Walding and Santana.  Zach Eflin got the start and gave up four runs in his four innings of work.

Camp Head Count:  48 - 1 = 47.  Prior to the game, Yacksel Rios was optioned to minor league camp.  The Phillies will need to pick up the pace with their roster reductions in order to get down to 25 before the season opener in Atlanta on March 29th. 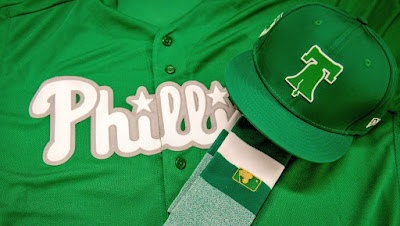 Email ThisBlogThis!Share to TwitterShare to FacebookShare to Pinterest
Labels: 2017, McGraw