One Sentence Summary:  The bullpen continued to look shaky as the Phillies lost to the Yankees, 7-3 on St. Patrick's Day.

What It Means:  Hector Neris and Adam Morgan gave up six total runs in their 2 1/3 innings of work.

What Happened:  After getting drilled in the ankle with a pitch on Friday, Bryce Harper returned to the line-up in the DH role, going 0 for 3 with 2 strikeouts.  He's now 0 for 8 for the spring.  Shane Robinson had a two-run triple for the Phillies in the 5th.

Featured Card:  Jerad Eickhoff has lost most of the past two seasons due to injury, and he's hoping to make a comeback this year.  Slated to start the season in the IronPigs' rotation, Eickhoff pitched three shutout innings while striking out 5.  His baseball card appearances were scarce in 2018, and this is his card from the 2018 Topps Now Road to Opening Day set, limited to 411 copies. 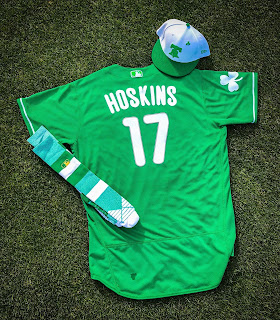