Number of Cards:  39
Card Size:  3 1/4" x 5 1/2"
Description:  As was the case with all Phillies photo cards issued throughout the 1970s, these cards feature a black and white photo with the players' name below.  Most of the cards (excluding the cards for Ollie Brown, Jay Johnstone, Pete Richert and perhaps Gene Garber) have blue facsimile autographs on the fronts.  The backs of the photo cards are blank and there's no indication on the cards themselves that they're from 1974. 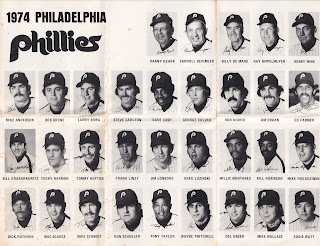 How Distributed:  The photo cards were handed out to fans individually and supplied to the players in
order to reply to fan mail or honor autograph requests.  I could be wrong, but I don't believe the cards were ever available in complete set form.  I believe after an original batch of 32 photo cards, featuring the manager, the coaches, and 27 players, an additional 7 cards were released throughout the season, as evidenced by the inclusion of Richert, Brown and Garber who started the season with other teams.  Richert was purchased from the Cardinals on June 21st, Brown was selected off waivers from the Astros on June 24th and Garber was purchased from the Royals on July 12th.  (Steve F. and Rick G. clued me in to the existence of the Garber card in comments to this set's original post almost six years ago.)
The back of a 1974 Phillies schedule shown here contains photos of the entire 25-man opening day roster, plus Mike Rogodzinski and Wayne Twitchell who would play in their first games in mid-April and early May respectively.  I'm making the assumption the photos shown here represent the original 32 photo cards, with 7 cards added later for the 3 players acquired along with Larry Cox, Jesus Hernaiz, Johnstone and Larry Christenson.  Ed Farmer was also added right before the season, purchased from the Yankees on March 21st, which explains why his background is different than all other "original" photo cards.  Finally, the Billy Grabarkewitz photo card is identical to his 1973 photo card, with the exception of the facsimile autograph placement.
Complete Standard Checklist (Unnumbered, presented here alphabetically):

Manager (1):  Ozark
Coach (4):  Berringer, DeMars, Rippelmeyer, Wine
Surprises:  The only surprise (to me at least) in the inclusion of a Garber card.  Acquired on July 12th, he didn't make his Phillies debut until July 31st.
Omissions:  40 players appeared with the Phillies in 1974 and only 6 of them do not appear in this set.  Reliever Dave Wallace gets the shaft for the second year in a row, as he appeared in 3 games in early May.  Outfield prospects Alan Bannister (26 games) and Jerry Martin (13 games) got overlooked, as did left-handed pitcher Tom Underwood (7 games).  The last two omissions each appeared in one sole game for the Phillies - pitcher Erskine Thomason on September 18th and catcher John Stearns on September 22nd.  Stearns would go on to enjoy a 10-year, All-Star career with the Mets.
Variations/Rarities:  The checklist found at The Trading Card Database lists four cards with autograph variations, featuring a slightly different placement of the facsimile autograph on each card.
Also See:  1974 Topps Stamps Phillies; 1974 Johnny Pro Phillies; 1974 Phillies Team-Issued Mike Schmidt
Resources:  The Trading Card Database; Phillies collectors Steve F. and Rick G.