1974 Johnny Pro Phillies - Complete Set (at least by my standards) 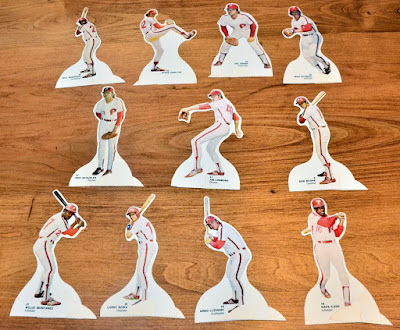 Several years ago, I began a quest to collect a complete Phillies team set of 1974 Johnny Pro Phillies cards.  I was able to easily (and cheaply) add 11 of the 12 cards to my collection, but the twelfth card, the elusive (and expensive) Mike Schmidt card, remained the sole card I needed to complete this team set.

To provide a little more background on this set, here's what I wrote about it back in November 2012:


I wasn't aware of the awesomeness of the 1974 Johnny Pro Phillies set until adding the Bill Robinson card to my collection last month at the Valley Forge card show.  Johnny Pro Enterprises (not sure what they did back in the day) issued two regional baseball card sets in the early '70s.  Their first set was released in 1973 and featured 28 different Orioles cards on a green background.  In 1974, Johnny Pro issued 12 Phillies cards on a white background.

The player photos on these cards were designed to be perforated and displayed in a stand that could also be punched out of the white background.  Which brings us to the reason for this post.

A few weeks ago, I was browsing eBay and came across a partial set of eleven 1974 Johnny Pro Phillies cards for sale, but the photos had long ago been separated from their original white backgrounds.  The picture accompanying the auction is shown at the top of this post.  Most importantly to me, included in the lot was the Schmidt card I needed.  I was one of only two bidders, and I was a little surprised my low bid actually won the auction.  Sure, the Schmidt card is missing its background, but I'm now considering my 1974 Johnny Pro Phillies set to be complete.

A few of these cards may need to be upgraded at some point, but the full gallery of this terrific oddball set from 1974 is presented below.

Those are really nice... and just because the set isn't mint doesn't mean its not complete. Too bad Johnny Pro didn't take off.

Regional oddballs like this are the spice of life. The card collecting world needs more variety like this today!

I have the whole set unperforated. I came across this and almost bid on it because it looks cool, in a different way, perforated as was intended. I forgot about it, so I'm glad it ended up in your collection, Jim!