Number of Cards:  39
Card Size:  3 1/4" x 5 1/2"
Description:  As was the case with all Phillies photocards issued throughout the 1970s, these cards feature a black and white photo with the players' name below.  The cards are unnumbered.  The backs of the cards are blank and there's no indication on the cards themselves that they're from 1975.  Some of the cards contain blue facsimile autographs, as noted on the checklist below.

The Johnny Oates card shown above features an actual autograph and the original Oates card was distributed without an autograph - facsimile or legitimate.
How Distributed:  The cards were handed out to fans individually and supplied to the players in order to reply to fan mail or honor autograph requests.  I could be wrong, but I don't believe the cards were ever available in complete set form.

This set is the only hope of finding Phillies baseball cards for Acosta, Bannister and Hahn.  Acosta's card is particularly interesting to me, as his 1973, 1974 and 1975 Topps cards feature a relatively clean cut pitcher while his card in this set features '70s hair gone wild.

Surprises:  The aforementioned Acosta is a bit of a surprise here.  He made the team's opening day roster, but only appeared in six games before getting released.  The scan below is a good reference guide for this set, and this is from a 1975 tri-fold brochure that has the team's full roster and schedule on the back.

There are six players with cards in the set not included in the composite photo below - (1) Garry Maddox, acquired from the Giants on May 4th for Willie Montanez, (2) Dick Allen and (3) Johnny Oates, acquired from the Braves on May 7th, (4) Tim McCarver signed as a free agent on July 1st and finally (5) Jerry Martin and (6) Mike Rogodzinski who played their first games for the club on May 27th and June 15th, respectively.

Omissions:  This set is a fairly complete representation of the 1975 Phillies.  There are five players who briefly played for the team who are not in the set - Wayne Simpson (5 games), John Montague (3 games), Randy Lerch (3 games), Larry Fritz and Ron Clark (both 1 game).

This set was originally featured in a post back in November 2014, and I'm going to slowly go through some of these team issued set posts and update them with new information gleaned (if any) over the past five years. 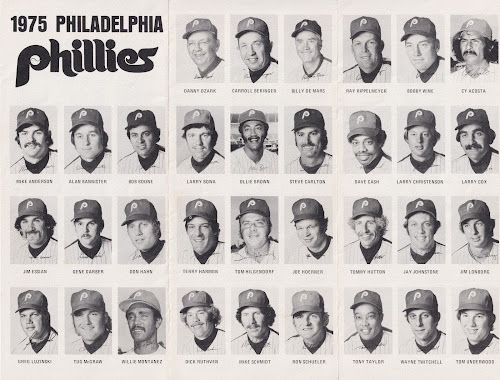 Oates joined the team after the start of the season (came over in the Dick Allen trade as I recall).

In 1976, he had won the starting catcher's job away from Boone, but was injured early in the season (maybe in the first game, I don't recall) and Boone never let it go after that.