Number of Cards:  38
Card Size:  3 1/4" x 5 1/2"
Description:  As was the case with all Phillies photo cards issued throughout the 1970s, these cards feature a black and white photo with the players' name below.  Some of the cards contain blue facsimile autographs, as noted on the checklist below.  Also as indicated below, and for the first time ever, the Phillies started using action photos for some players in lieu of the portrait cards they had issued up until this point.  Some of the cards are cropped so that there's a larger than usual white space on the bottom border, with the Tommy Hutton card above being a good example of this.  The backs of the photo cards are blank and there's no indication on the cards themselves that they're from 1977. 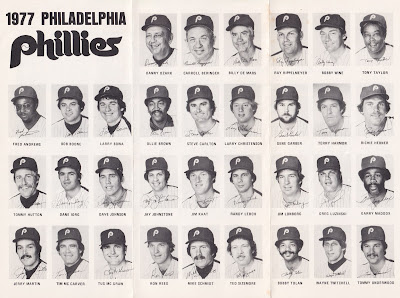 How Distributed:  The photo cards were handed out to fans individually and supplied to the players in order to reply to fan mail or honor autograph requests.  I could be wrong, but I don't believe the cards were ever available in complete set form.  Every player on the opening day 25-man roster is included in the set, along with four players who made their season debuts after the start of the season (Richie Hebner, Warren Brusstar, Jim Lonborg and Tim Blackwell) and two players acquired via trades in June (Bake McBride and Barry Foote).  Given that McBride and Foote didn't play their first games with the Phillies until mid-June and the fact that their cards aren't included on the checklist found at the Trading Card Database, these could be considered short printed cards.

Manager (1):  Ozark
Coach (5):  Beringer, DeMars, Ripplemeyer, Taylor, Wine
Surprises:  After appearing in 4 games with the Phillies in 1976, catcher Tim Blackwell received his one and only Phillies baseball card in this set.  He appeared in one game for the Phillies in 1977, entering a game on June 11th as a pinch-runner for Bob Boone and scoring a run.  A few days later, he was shipped to the Expos with Wayne Twitchell for Foote and Dan Warthen.
Omissions:  Only 5 of the 36 players to appear with the Phillies in 1977 are not in this set, and the Phillies can't really be blamed for omitting any of them.  Pitcher Warthen came over from the Expos with Foote, but he only appeared in three games for the Phillies.  The other four omissions - infielders Mike Buskey, Jim Morrison and John Vukovich, along with pitcher Manny Seoane - were all September call-ups.
Variations/Rarities:  As mentioned above, the McBride and Foote photo cards were added to the set at some point after mid-June.  Fellow collector Rick also let me know about a Mike Schmidt variation that is a portrait photo of the slugger and not an action shot of him swinging.  Not knowing which version is more prevalent, I've included both versions in the standard checklist above.  Also, the Larry Bowa card I have in my collection doesn't have a blue facsimile autograph.  There may be other instances of these signature variations as well.
Also See:  1977 Hostess Phillies team set.
Resources:  The Trading Card Database; Phillies collector Rick G.